Rupert Legh doesn’t take for granted what the TAB Everest provides a racehorse owner, regardless of their standing.

So that’s why he’s rapt that exciting sprinter Masked Crusader has secured his place in the 2021 edition with almost six months remaining until one of the nation’s most anticipated races.

It’s also special to him because the some of the people involved in Max Whitby and Neil Werrett’s Everest slot are also part-owners with him in the Hawkes Racing trained galloper.

“It was the right decision because Neil and Colin (Madden) are in the horse and they are also a slot holder,’’ Legh said.

“We’ve had an interesting week of discussions with people wanting to put him in their slot. 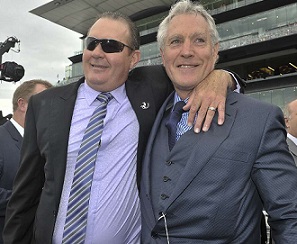 “The parties we’ve been dealing with have been understanding, and that it would be hard to prize the horse away from slot holders who own the horse.”

Legh has been involved in each edition of the Everest to date – via his star sprinter Chautauqua, three time contender Santa Ana Lane and Tofane – and he said being locked into a slot early takes the pressure off and allows you to enjoy the experience.

Masked Crusader joins his TJ Smith conqueror Nature Strip in the 2021 field and has his final start prior to being aimed at the Everest, run on October 16, in Saturday’s Group 1 $600,000 Schweppes All Aged Stakes (1400m) at Randwick.

“It’s been a fun one, the good thing is we’ve been lucky we have a very nice horse on the up and a lot of people targeting him and recognising that he is the right horse,’’ Legh said.

“I was talking to John (Hawkes) about it and he couldn’t agree more that it’s good to get it off the table and to go and enjoy the journey. You have a target race and it makes it easier when you are planning a horse’s program.

“I don’t care who you are and how many horses you have if you don’t enjoy this journey going to the Everest then you have a problem.”

While there was a lot of talk last year about Masked Crusader as a potential Everest runner, co-slot holder Max Whitby said despite the boom on him it was never really a consideration as all involved wanted to see how the gelding evolved.

“We said ‘let’s see how he comes up as a four-year-old’ and in hindsight it was the right decision,’’ Whitby said.

“It’s been a decision made easy because Neil and Col have a toe in the horse. But I like the horse and I‘m happy he’s come up well this prep.

“He’s a four-year-old that is lightly raced and on the up and I’m happy I’m racing it with my partners who have an interest in it.”

The Whitby/Werrett slot has had mixed results in the four editions of the Everest so far – they finished second in the inaugural running with Vega Magic, fifth in 2018 with Graff, 10th in 2019 with Sunlight while last year Trekking finished fourth.

This time around he’s relieved not to be the ‘last man standing’.

“I’m happy for Neil and Col and when I threw the idea up I said it’s another bonus for you, because you’re owners, and I said ‘there’s plenty of ways to compensate me and we’ll worry about that later’,’’ he said.

Masked Crusader was on the third line of Everest betting at $8 with TAB prior to his run in the All Aged with Nature Strip the $4.50 favourite.