Jack Bruce - A 'Jack' Of All Trades

Jack Bruce’s first trip to Sydney was to see Black Caviar hunt down Hay List in the 2013 TJ Smith Stakes. The trip was a 21st birthday present from his family

Just a few years later he would land a job with Bjorn Baker and call Sydney home.

“I have always loved racing and my father had an interest in it, which is where mine came from,” Bruce said. 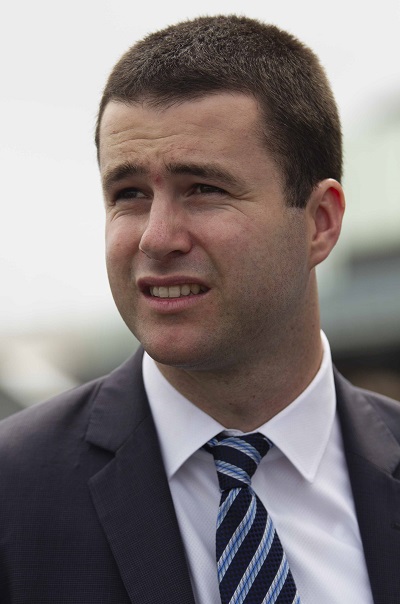 “He hobby-owned and bred horse and did a bit of work as a financial consultant in the industry so I’ve always followed it from a young age.”

Bruce, now 28, also inherited that knack with numbers, holding two degrees from the University of Canterbury in Christchurch, one in accounting and finance and the other a BA in economics.

Having finished his study, Bruce turned down jobs at a bank and a roading company; his heart already belonged racing.

At age 19 Bruce gained his first experience in the industry, working at Windsor Park Stud. He worked on and off at the Cambridge-based property for about five years.

“It all blossomed from there but from that point of view my background is very much in a farming sense as opposed to the racing stables. I couldn’t believe how much I enjoyed being around the horses, being hands on, being on the farm,” said Bruce.

“When you grow up in New Zealand a career in racing is a little bit harder to see than if you grew up in the vibrant Sydney racing industry.

One of Bruce’s earliest racing memories is watching Flying Spur win the 1995 Golden Slipper, then there is Lonhro. Thousands grew up idolising the ‘Black Flash’. Kids in New Zealand were no exception.

“Lonhro would front up what seemed every weekend, he’d win a big Group One,” recalled Bruce.

Bruce is now the Racing Manager of Bjorn Baker’s Warwick Farm operation and it all came about from a chance encounter.

“I applied for the Darley Flying Start, which is now the Godolphin Flying Start, and I was lucky enough to get on that course. I did the two years of travelling around the world and all of the education that goes with it,” Bruce recalled.

“When I was in Sydney with Flying Start I met Bjorn Baker in the bottom bar of Rosehill Gardens after the last.

“He had trained a double with Burbero and Off the Rails. It poured with rain before the last race and Burbero snuck up the inside to beat one of Kim Waugh’s by a nose.

“Bjorn only had about fifty horses in work at that stage and I just got chatting to him because I grew up around the corner from where (Bjorn’s father) Murray trains at Cambridge.”

Three and a half years in with Baker, Bruce wouldn’t have it any other way.

“We have a very good relationship and I really appreciate that, he is not only a boss but a mentor to me. 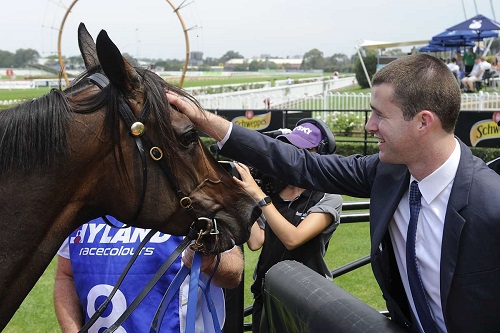 “It’s a tough industry and to be able to work with somebody who has a smile on their face at 3:30am and it still be there at 10:30pm at night is really important.

“Bjorn is a very intelligent man. He puts on the persona that he is the fun horse trainer but he is a lot smarter than the average bear.

“He has good systems in place and taught me to train horses but also how to run a business and have the work ethic you need to succeed in Sydney.

“He is a guy who has come over here with two slow horses and grown his business to be a top 10 trainer in Sydney.

“My title is Racing Manager which is a loose term for any trainer’s assistant in Australia. I’m an extra pair of arms and legs for Bjorn, that’s a good way of describing my job.

“Because I started when Bjorn had 60 horses, I had to be across everything to help with the business side of things, whether its accounts or handling money going in and out, but my most important job is to help him with the training – trackwork, racedays, the medication lists.

“Then there are acceptances, nominations, race planning, client relations, voice updates. Anything to do with the entire running of the business. When our foreman is away I take more of an active role on the ground too.”

Bruce doesn’t deny that going out on his own is something to strive for, but he knows time is on his side.

“It is certainly something that interests me, but I see how hard it is to break in and I know firsthand what Bjorn has had to sacrifice and how hard he had to work,” Bruce said.

“It’s firmly on the backburner whilst I work for him and gain all the experience I can. He has fostered a huge passion in Sydney racing for me though.”

Bruce, who played representative cricket at a young age against current Black Caps Kane Williamson and Trent Boult, says punters should keep an eye on a “little Dundeel filly called Miss Einstein” ahead of the autumn carnival.