There’s nothing Robbie Dolan is certain of more than he was destined to be a jockey.

It didn’t matter that he came from a small town in Ireland, that his family lived a modest life or even that he wasn’t considered good enough to be given the opportunity to show his worth as a rider. 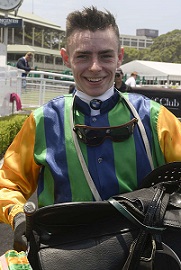 So a few years ago, with almost literally nothing to lose, he headed for the ‘lucky country’ and it seems Ireland’s loss is becoming Australia’s gain as the 23-year-old fast climbs the apprentice ranks in Sydney.

“Back in Ireland I was a bit lost, I didn’t know what to do,’’ Dolan said.

“I wasn’t getting on a roll, it’s hard to get momentum over there unless you’re with a big stable and to be honest I wasn’t good enough to get going.

“I wanted to be a jockey but I had no confidence, no money. I came to this country with nothing.

“In my heart I always believed I could do it, I just needed the right kick and the right opportunities.’’

On the advice of a friend he contacted John Sadler and moved to Melbourne but his attempts to join the apprentice ranks there were denied.

That’s despite Dolan already completing the Irish apprentice academy and his one season, including five race wins, in the saddle back home.

So in the second half of 2016, again with nothing to lose, Dolan landed at Warwick Farm and would ride work for “anyone who would put me on’’.

He was introduced to trainer Mark Newnham and struck up an association that would soon lead to Dolan asking to be his apprentice. But he still had some hoops to jump through before being granted a license.

“I had to get sponsored by Mark, because I’m not an Australian citizen,’’ he recalled.

“I was eager to get going but it wasn’t until the end of April (2017) when I had my first ride. Then I was riding anywhere I could get rides, you name it I’ve probably ridden there.’’

Dolan’s father, Robert, is a former jockey who has spent 20 years as a groom for champion Irish trainer Dermot Weld while his older brother Barry is a trainer in Florida in the USA.

He’s always had role models and once he signed up with Newnham, Dolan found another in former champion jockey Wayne Harris.

It was a deliberate move by Newnham to team the inexperienced apprentice up with Harris, who acts as not just his manager.

“Robbie just needed to get used to Australian conditions, the pace of races and the tactics,’’ Newnham said.

“One of the reasons I asked Wayne Harris to manage him was so he could mentor him as well.’’

It seems Harris has set Dolan on the right path and it’s something he’s very grateful for.

He’s been carefully taken through the grades, to use a racing cliché, and through the summer he’s started to shine.

Dolan’s first full New South Wales season realised 27 wins and by early January he’d added another 45 in 2018-19 including his first city treble on board Single Bullet, Turnberry and Live And Free at Royal Randwick.

Newnham said it’s been a two-year plan to unleash Dolan on the metropolitan scene and he says the young Irishman reminds him of last season’s champion apprentice Rachel King. 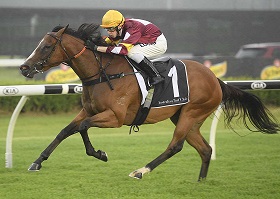 Robbie Dolan wins on Koonunga at Canterbury, one of his four winners at the February 2 meeting. (Pic: Bradley Photos).

“He’s got good ability, he’s naturally light and is one of the few apprentices that can ride a race from back in the field,’’ Newnham said.

“Even when he was getting offers (to ride in town) I kept saying no until he was ready and now it has proven its worth.

“He’s a hard worker, he’s here to ride and I think he appreciates the opportunity he has been given.’’

It’s clear Dolan not only appreciates but is relishing this chance.

He’s come a long way from Kildare to Sydney and has just stopped pinching himself when he looks around the jockeys room.

He no longer lacks confidence and is even entertaining the possibility of stealing the apprentices’ premiership from under Sam Weatherley’s nose later in the season, even if it is a year before he’d consider himself a serious shot.

“I love the whole competition in the jockeys room between the boys,’’ he said.

“When you first go in you’re a bit nervous, these are some of the best riders in the world. Ask anyone in the world they’ll tell you the Sydney jockeys room is one of the best, you just look around and see the likes of James McDonald, Hugh Bowman, Kerrin McEvoy.

“I’m trying to have a winner a week, that’d be fantastic. It’ll be hard to beat Sam in the apprentice title but I’d love to have a crack and make it interesting.’’

Dolan realises there’s a long way to go - in reality he still claims three kilograms (now two) and still has plenty of learning to do.

But while he still needs guidance, he doesn’t need any encouragement.

“When I moved to Australia it ignited a whole new fire, it was like a fresh start,’’ he said.

“I felt I was going up and down in the one spot in Ireland, getting brushed aside, but I was a new face and there were new people to learn from.

“I can see my future being here. This is the most I’ve ever had in my life. I left Ireland with no money and just a dream, for it to come true I’m not just going to cut it short and go back home.

“One thing about being at the bottom there’s only one way you can go and that’s up.’’