Inside The Physio Routine That Keeps Winx At Her Best

Winx is not only one of the greatest horses we’ve ever seen – she’s also one of the smartest.

Equine physiotherapist Tom Simpson, whose job it is to rub Winx the right way as part of the team under trainer Chris Waller’s direction, and keep her in peak physical condition for racing, said the wonder mare was a horse of extraordinary intelligence.

“I’ve been doing this for 15 years and I’ve treated thousands of horses,” Simpson told Racing NSW.

“Winx is the smartest horse I’ve ever come across – without doubt. She’s extremely intuitive and when I treat her I know from her reaction she genuinely understands what I’m doing is beneficial to her.

“Personally, I think her intelligent nature is a big reason why she’s been able to achieve her longevity and maintain this incredible winning streak that she’s on. She combines every attribute of the superior athlete and that’s what separates her from the rest.

"She will stand there and not move a hair and let me do whatever I want and as soon as I’ve finished she knows it and she motions, like, ‘Righto, enough of you, get out’.

“She doesn’t waste any energy whatsoever. She’s an exceptional animal.”

Simpson, who is employed by many leading stables, said he had been treating Winx since she was a two-year-old and that she was comfortable with the routine and would effectively correct him if he changed the order. 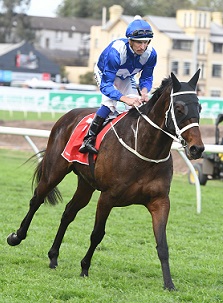 Winx's intuition when it comes to her physio treatments is part of what makes her a champion. (Pic: Steve Hart).

“I first checked her before her debut race and that’s where Chris is fantastic with his approach,” Simpson said.

“There had to be a period of convincing many owners and trainers that physio was a necessity rather than a luxury, but Chris readily accepted that prevention was better than cure.

“We do a bit of a routine at the start of a treatment, just stretching and assessing her range of motion, and if I do it the wrong way she paws the ground until I go back the right way. If I do it out of sync, she’s like, ‘Nuh, you’ve missed it’. It’s got to be neck, front legs, back legs.

“She’ll see me and get into position to start the routine. I do what we call a provocation test with the neck and now I put my hand there and she follows the process.

"I don’t have to touch her leg to pick it up - she lifts it – so she has memorised the routine and doesn’t like it being changed.

“She’ll react by licking her lips when she’s being treated. That’s a sign with all horses that they’re happy and enjoying it. They’ll lick their lips, yawn, or their top lip will tremble.

“Fortunately I get along with Winx, which is great because she’s not backwards in letting you know if she doesn’t like you.”

Simpson said that with Winx, whose legion of fans have gotten a kick out of receiving insight into the treatment via video on social media, it was all about maintenance.

“One thing I’ve noticed with all the Group One horses is they have a great constitution,” he said. “When they go at the same speed as others they exert less energy doing it.

“She’s on a once-a-week treatment plan. She’s a sound, happy, great athlete. I’d love to say that what she does on the racecourse all comes down to the physio, but it doesn’t. She’s just a dream to work with.

“She has been that well managed by Chris and his team that everyone connected with her and the racing public are reaping the rewards of her still being around to race. They’ve looked after her brilliantly.

“I honestly believe she’s just starting to peak as an athlete, which is scary. I’d be very surprised if what we saw in her first-up win isn’t repeated in the other runs she has left. She’s still got that hunger to race, still got that desire.

“They don’t run home in 33 seconds or less for their last 600 metres if they’re not thriving on racing. She still loves it.”