Group 1 winning jockey Rory Hutchings says finally seeing himself as a professional athlete will be the key to taking control of his career. 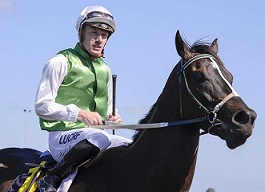 The 24-year-old has slipped quietly back into the riding ranks in the past month with a focus he certainly didn’t have when he returned to New Zealand in March after four years in Sydney.

He’s enlisted the help of dietician Megan Roberts and fitness coach Ron Johnson to get his weight under control and as he prepares to make his metropolitan return at Canterbury on Friday night says he’s seeing the benefits.

“I was just a little bit lost, I went home for a couple of months and I didn't enjoy it,’’ Hutchings said.

“I was struggling to ride the weight when I was riding so I gave it away for a bit and just enjoyed myself for a while.

“I've been working closely with Megan Roberts and I have Ron Johnson at my house at the moment training me for a couple of weeks.

“I haven't walked this light in a couple of years at least. The determination I'm feeling this time around is a lot greater.’’

Hutchings only spent about two months back home in New Zealand, in that time he rode some trackwork and did breaking for Te Akau but his weight reached around 70kg.

When he says he hasn’t been ‘this light’ for some time he’s a comfortable 58kg with scope for a little more to come off in time.

“I knew it was going to be a long haul, it took a long time to get that weight off and I just took my time,’’ he said.

“As soon as I came back to Sydney I was determined to get back into race riding.’’

It probably went unnoticed to many but Hutchings rode a winner at his first ride for 10 months, the Coonamble Cup on Falcon Island for Gai Waterhouse and Adrian Bott.

The horse carried 61kg to victory and while he wasn’t quite ready for the comeback to begin it was a timely boost.

His soft relaunch has continued in the month since the Coonamble Cup and the 2015-16 Champion Sydney Apprentice, and a two time Group 1 winner in New Zealand, recognises the road ahead is going to be long.

He’s back with the Chris Waller stable at Rosehill, where he was based as an apprentice, to ride work every day and when he gets the chance he heads to Randwick as well.

“I know how tough it is in town in Sydney but I wouldn't be doing this if I didn't want to be up there with the best,’’ Hutchings said.

“I know it is going to take time but that's the ultimate goal, to be riding consistently in town.

“Things are slowly picking up now. Chris has said he'll support me, he knows the struggles I've gone through.

“In the past I've probably not seen myself as a professional athlete. I want to show the trainers this time how hard I'm working and how much I want it.’’

Hutchings heads to Canterbury on Friday with two rides for trainer Bryce Heys then backs up at Kembla Grange on Saturday with six mounts as his momentum builds.

His last city winner was on Bon Amis at Rosehill just over a year ago and gives Litchfield ($15) some hope of running into the money in the Featherdale Wildlife Park Plate (1550m) after a last start second at Canberra.

“I just got left in front and he got a bit lost. The winner came right down the outside and he only saw it late,’’ he said.

“He's going into this race well and with a horse to follow he might run a race.’’

Emthree is an outsider at $26 in the Fastlane Karting Sprint (1200m) and after partnering the colt in a trial he says he’s a horse for later on - “he's probably looking for a little bit further, it's a starting point for him’’.

All the fields, form and replays for Friday's night meeting at Canterbury