It’s Day One of The Championships at Randwick with four Group Ones across the ten race card including the Heineken TJ Smith Stakes (1200m) and The Star Doncaster Mile (1600m).

The rail is in the true position and the form has been done for a soft track.

BAHAMA (RACE 1) There are a couple of red flags with Hawkes-trained debutant Bahama, namely that her one trial was on the synthetic and that she half fluffed the start but there was a lot to like about how she ran through the line. All of her rivals were off the bit late but she was still in second gear. She could have won the heat by lengths if they wanted her to. Kerrin McEvoy takes the reins ahead of her first start and although she gives away race experience, there is nothing in the form from those with runs under their belt that jumps off the page. Continue to monitor the market but there has been early betting support, which is encouraging. $6 TAB Fixed Odds.

ANAMOE (RACE 6) He produced a Sires-winning run in the Golden Slipper last start when charging to the line from the rear. His last 600m of 34.33s was a whopping four lengths faster than the second quickest in the race. The son of Street Boss was suited by the brutal early tempo of the race, thanks to Profiteer, and he won’t get that same set up here but he isn’t a one dimensional colt that has to settle out the back. We’ve seen him settle midfield in the past and the middle draw gives James McDonald the option to be within striking distance regardless of how the race is run. All being equal, Anamoe should be winning as he only has to hold his form. $2.10 TAB Fixed Odds. 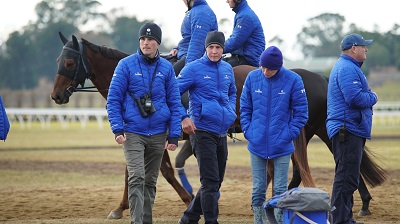 Godolphin are well represented on Day One of The Championships

KHOEKHOE (RACE 7) Ran sixth in the Rosehill Guineas but it was a fantastic Derby trial. He was clearly the best of the on pacers after Grandslam set it up for the closers and was only second up over 2000m, five weeks between runs. The Matt Cumani-trained stayer gave a kick at the 400m despite dragging the field up to the leader. He was still there 100m from home before fading late, as he was entitled to do. He strips fitter now third up, has had the experience Sydney way of going and draws to box seat if Craig Williams eases to find the back of the likely leader Yaletown. $10 TAB Fixed Odds.

AVILIUS (RACE 9) It’s hard not to ignore that everything has seemingly fallen into place for Avilius. Already a three-time Group One winner, the seven-year-old looks well treated with 56kg. Think Hartnell, Hauraki and It’s Somewhat as big recent mile winners for Godolphin, all with similar profiles. Avilius finished within 0.4L of Verry Elleegant first up before running the fastest last 600m split of the meeting in the George Ryder Stakes last start when a luckless third. The Ryder has provided four of the past six Doncaster winners. James McDonald does the steering and the speed will be hot up front. $13 TAB Fixed Odds.

PERFECT RADIANCE (RACE 10) Out of sight, out of mind? It’s the only way to explain why the market has overlooked her. She’s a classy filly. The daughter of Snitzel has had three trials to ready her for this first up assignment. First up last preparation she only won a Class 1 at Newcastle but she beat Knight and broke the track record. She was then luckless behind Regal Stage on a soft track at Randwick. Forget her Spring Stakes flop thereafter as she pulled up lame. In her short career to date she has shown she can run time and she draws to stalk the speed. $16 TAB Fixed Odds.