If there’s one thing James Fathers knows for sure it’s that training racehorses is his future.

The Englishman, racing manager for popular trainer Gary Portelli, doesn’t come from a ‘horsey family’ as such and his desire to want to be a trainer could be somewhat likened to having ‘run away to join the circus’. 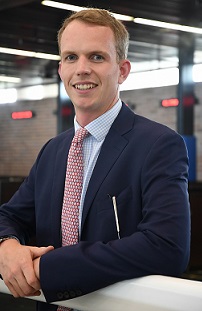 Perhaps it seemed like that too when the 26-year-old joined the Portelli team late in 2019, where the mood is a lot different to what he’s used to in England, but the hands on role was just what he’d been looking for since he arrived in Australia a year ago.

“Gary is very good to work for, he’s pretty lively, and he’s enthusiastic which is the main thing,’’ Fathers said.

“His record is very good, he’s trained a Slipper winner which is a huge achievement.

“In comparison to English trainers the Australian trainers are more relaxed, more personable, it’s less a boss-employee relationship and a bit more matey.

“And we’re able to bounce ideas of each other.

“He’s easy to work for and he gets you involved, that’s the best thing. You learn quickly because you are involved in all aspects of the business.

“The more you can work for good people the more you’re going to learn.’’

Fathers has been riding horses since he was 15 and he went to school in the racing heartland of Cheltenham but it wasn’t until he graduated from the Royal Veterinary College in 2014 he decided he wanted to train.

Like many young people chasing experience in the game, Fathers has worked for some sizeable names in world racing.

He’s been an assistant to the likes of Ed Dunlop and Ralph Beckett and it was Beckett that pointed him to Australia and he snared a role with David Hayes.

“Ralph Beckett suggested coming out here because Charlie Duckworth was at (Chris) Waller’s and Billy Jackson Stops was at Godolphin so it seemed like a good path,’’ he said.

“I came out to work for David but he didn’t have the senior role I was looking for.

“I ran into Annabel Neasham, who works for Ciaron Maher, one day and she said Gary was looking for someone to be his racing manager and put me in touch.’’

Fathers has set himself a goal to be training around the age of 30 but says he won’t rush into it and is prepared to wait until the timing is right.

Back in England the role of racing manager doesn’t exist and he’s found in the early days of teaming with Portelli it’s a lot like being the trainer at times and that’s exactly why he’s relishing it.

“What I’m doing now is a lot more like being a trainer than what I would have done back home,’’ he said.

“I get to do a lot more client facing stuff, more owner communication, you’re involved more in the race planning side.

“At home occasionally you stood in as the trainer but here day to day I’m with Gary and talking through stuff. I’m getting a good understanding of the whole business at this early stage.’’

It isn’t difficult for Fathers to find things to like about living and working in Australia, and Sydney in particular, especially for a tragic cricket fan.

And, aside from the once in a lifetime experience of being trackside for the Winx swansong, it was during the time working for Hayes he noticed how the quality of life is so much better for Aussie racing participants. 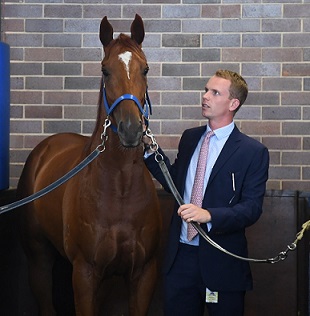 James Fathers tends to Above And Beyond at Randwick (Pic: Steve Hart).

“Lindsay Park set me up with a few of their horses and riding out on the track at Randwick you can see the city skyline and I just thought it was the coolest thing,’’ he said.

“I love racing in England but the downside is you’re a lot more rural and a bit in the middle of nowhere.

“In Sydney you can go racing then straight after you can go to the beach or watch live sport, get into the city. You have the best of both worlds.’’

So sometime in the 2020s it’s highly likely that Fathers will bite the bullet and realise his ambition to train and it could well be in Australia.

Sure, he’d love to train back in the home country but what he’s seen of the Australian industry – and fair go ethos - suggests it could be the right place to take the plunge.

But that comes back to the timing being right.

“At this stage working for people like Gary broadens my experience, but of course one day you’d like to be able to make the decisions yourself,’’ he said.

“You only get one chance to make your start, you get the benefit of the doubt when you start off but if you mess it up you won’t get that start again.

“It’s probably easier financially to start out in Australia. In England it’s hard to make any money and you need a lot more money to get going because you often have to buy a yard yourself and put that money into it.

Aside from being immersed in the art of training racehorses, Fathers has – not surprisingly – also been given instruction in the world of pigeon racing.

Portelli’s passion for the pigeon is well known and you get the sense the popular trainer will be passing on plenty of knowledge in that field as well.

“I’ve learned a lot about pigeon racing too, I’ve had a tour of the pigeon loft and he talks about it plenty!,’’ Fathers said.

“That’s certainly been unique because there aren’t many English trainers into pigeon racing. I’m sure Gary will give it a go to teach me as much as he can about it.’’