Everest Just Another Mountain For Collett To Climb

There was a time Jason Collett probably would have let the occasion of riding one of the favourites in a race like the $15m TAB Everest overwhelm him, even just a little.

It’s not quite like an actor getting stage fright, but not far off. When it came to the big dance things just didn’t seem to work out.

The Jason Collett who has his first TAB Everest ride partnering second favourite Gytrash, and The Kosciuszko favourite It’s Me at Royal Randwick on Saturday, has come of age and you only need to look back a few days, to his Group 1 winning ride on Montefilia, to see the proof.

“Everyone says the pressure doesn’t get to them but at some point it always does,’’ Collett said.

“Last Saturday was going to be a great example of whether it did or it didn’t. It was a good chance for me to showcase it isn’t affecting me like it may have in the past.

“For David (Payne) to give me the opportunity on that filly, favourite in a Group 1, that was great.

“I felt the last few months from winter into spring the momentum has carried on whereas sometimes in the past it hasn’t. You take the opportunity, get the result and it’s led to another one.

“It’s snowballing I suppose in some ways. This is a big week and it was a good way to start it last Saturday.”

Collett, 29, suspects it was his winter burst of form that caught the eye of Gytrash’s trainer Gordon Richards.

The South Australian trainer hand picked Collett to be Gytrash’s rider for the TAB Everest based largely on having some success punting on Sydney racing and particularly on horses Collett was riding.

As flattered as he is, Collett admits he’d barely heard of the horse he was being headhunted to ride.

“It was at the stage where I was happy to be chosen to ride in the Everest. I don’t think I’d had too much of a look at the horse or his form.

“When I had a look I thought ‘oh wow he’s actually pretty good’.

“It may come back to me having a good winter. I don’t know how long it’d been going on with Gordon having a bit of luck with me. That may be how it worked.”

Collett can see some parallels between Gytrash and himself and it seems he’s not alone in that assessment.

Given the five-year-old is stationed at Collett’s partner Clare Cunningham’s Warwick Farm stable they’ve had plenty of time to get to know each other.

Gytrash works with Noble Boy at Warwick Farm, watch the gallop then an interview with trainer Gordon Richards. The #TABEverest is just 10 days away! @tabcomau @racing_gordon @inglis_sales @theracessa @7horseracing pic.twitter.com/NgvG5T2v3Q

“I know him quite well now. He’s an interesting character,’’ Collett said.

“He’s a bit of a loner, he doesn’t like to be pestered. It was said in close circles after the Concorde that he was a bit similar to me.

“The last couple of weeks he’s been really well. From what Gordon says he’s like back home that’s how he is at the moment and it gives you confidence.”

Gytrash had a reputation as a ‘giant killer’ when he arrived in Sydney having claimed the scalp of Nature Strip back in February and he did it again with a stunning Concorde Stakes (1000m) win over the one-time Everest favourite last month.

He’s now considered a giant of the TAB Everest as the $5 second favourite and he’s confirmed that standing with impressive trial wins and track gallops in the six weeks since the Concorde.

After Gytrash’s gallop on Monday at Warwick Farm, Collett said the gelding is ready to produce his best in the TAB Everest if he gets the breaks.

“We’re happy with how he is. His work has been good, the horse is really well and things are on track,’’ he said.

“He goes in the wet but he’s going into it on the fresher side as opposed to Classique Legend who will be third run in so that could have been a concern if the weather turned sour but it doesn’t look that way.

“He’s not one dimensional and we all saw the turn of foot when he beat Nature Strip. I haven’t even really thought about a barrier, he’s adaptable and he will need to be even if he were to get whatever the perfect barrier is for him.” 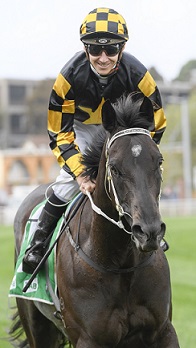 Jason Collett and It's Me (Pic: Bradley Photos).

We now have a fair handle on where Gytrash stands in the scheme of things but the same can’t be said for Collett’s mount in the $1.3m The Kosciuszko (1200m).

The unbeaten mare It’s Me has been virtually untouchable in four starts, so much so she’s $3 TAB favourite, despite being a last start Class 3 Highway winner, to beat much more seasoned performers like reigning champ Handle The Truth and multiple city winner Man Of Peace.

Collett is adamant she’s as good as any of her opposition but if anything is her downfall it’s that lack of experience.

“I think her ring craft is what she doesn’t have, I think she will have the most ability in the race.

“Going from a Class 3 Highway race to open class country sprinters there’s a huge difference in pressure so she’s going to need to do things right to be winning.”

That said Collett describes how exhilarating it has been to be on the mare’s back as she’s reeled off sectionals like the 32.41 last 600m (Punter's Intelligence) she clocked in her latest win on September 19.

“It’s pretty amazing. You might think she’s beating country horses but the feel she gives you when she quickens, she’s travelling well then she goes bang,’’ he said.

“It’s very exciting for a rider. She puts them away so quickly, the last two starts I’m too busy looking over my shoulder to see where they are to really take it in.”