Jockey Kerrin McEvoy has given dual Everest champion Redzel a glowing review after his first trial on the road to attempting a threepeat of Australia’s richest race. 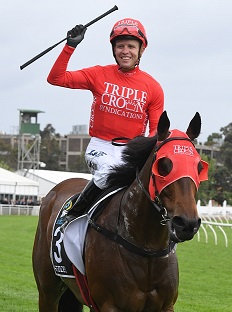 The seven-year-old finished second in the 800m trial at Gosford on Monday without his trademark blinkers, less than half a length behind Oakfield Twilight, and McEvoy said everything about the morning was positive.

“He cantered around to the gates quite relaxed, it was pleasing to see him jump out in a race day manner and apply himself well,’’ McEvoy said.

“There’s improvement to come but it all points to him being in a good head space and more importantly he moved well in his trial.

“It was pleasing to get that first box ticked.’’

Redzel has recorded just two second placings, the latest the Group 2 Victory Stakes when run down by I Am Excited in April, from five starts since his second Everest win which has raised questions about his ability to win the feature sprint again.

He won his second TAB Everest in the Yulong Investments slot and Yulong’s owner Yuesheng Zhang has again partnered with Redzel, Peter and Paul Snowden and the gelding’s owners for 2019.

The Gosford trial served as a kick off point not only for Redzel, who is $11 in TAB’s Everest market, but Inglis’ runner In Her Time (sixth in the trial) and last year’s fifth placegetter Graff (fifth) who is still chasing a slot.

McEvoy held Redzel together in the trial, run in a slick 49.56, and resisted the temptation to let him stride over the last 200m in keeping with the Snowden stable’s pattern for his first appearance.

“He could have done more but it was just a case of wanting him to have that amount of work for his first trial back,’’ he said.

“It was still a nice hitout but we didn’t open him up completely and I was aware of that.’’

Co-trainer Peter Snowden was also rapt with Redzel’s demeanour and said on Sky Sports Radio shortly after the trial it’s onwards and upwards to his next trial in a couple of weeks.

Snowden has marked the Group 3 Concorde Stakes (1000m) at Royal Randwick on September 7 for his resumption in what is already shaping as a stern test with TAB Everest contenders Santa Ana Lane, Sunlight and Pierata expected to line up alongside unbeaten Queenslander Zoustyle.

“He’s normally pretty casual but he was good today, he showed a fair bit of intent the last furlong without being asked to do anything,’’ Snowden said.

“It was good to see and probably better than what he did last year first-up. He’s on track and I’m happy with what he did.

“We’ll ask a bit more of him in his next trial, with his blinkers on, and that should bring him on nicely to run on Concorde day.’’

Redzel runs second in his Gosford trial on Monday

McEvoy will be in the saddle in the Concorde and it’s that race which will shape his decision making on which horse to ride in the $14m TAB Everest (1200m).

Of course he’s also the regular rider of the emerging Classique Legend.

“I’m not trying to think too much about it yet, the grey horse has to trial and then we will see how Redzel goes under race day pressure,’’ McEvoy said.

“He has to get to the races and prove he is back to his best and that’s what we’re waiting to see.’’