He didn’t get to see the Great Barrier Reef but boom English jockey Tom Marquand says he had the best summer holiday in Australia he could ask for.

In the space of seven weeks or so, the 20-year-old former champion UK apprentice transitioned quickly from virtual anonymity – he rode sparingly during a month in Melbourne a few years ago - to in-demand with Sydney trainers and left followers not wanting his holiday to end. 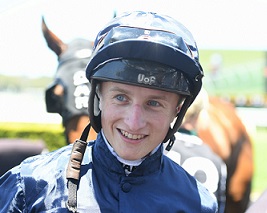 With a mix of his hard work ethic, charm and obvious talent it’s easy to see why Marquand was such a hit. And he promises it won’t be the last Sydney sees of him.

“Hopefully I can sort out a Visa for next year. Unless something changes at home I’ll be back,’’ he said.

“It certainly exceeded what I thought would happen. I was hoping I would come over and get a few rides, be busy and ride for various trainers.

“I was expecting to ride a few winners but I was thinking they were going to be provincial or country.

“I didn’t care what I came over and made, I was thinking I’d make back what I paid for the flights and renting a car for two months.’’

Six city wins and a number of provincial successes may not sound like a lot – especially considering he rode 106 winners back home last year - but Marquand didn’t have the backing of a major stable.

He landed in Sydney to be based at John O’Shea’s Randwick stable and it’s all due to a mutual friend – O’Shea’s ex-foreman Tom Ward who is 2IC at Marquand’s boss Richard Hannon’s stables.

“Tom is a very clever fellow and is someone I hold in a very high regard,’’ Marquand said.

“I’ve worked closely with him in the last couple of years at Hannon’s so he was the one who pushed me towards John.

“All credit to him for that and to John for taking me, it’s been awesome.’’

Sydney is no stranger to a visiting jockey from the UK – the likes of James Doyle and William Buick have spent time in town under the Godolphin banner – and a year ago Irish jockey Declan McDonough enjoyed success during an extended stay.

If it seemed like Marquand was enjoying himself away from the winter back home – and who wouldn’t thrive in an Australian summer – he was having a blast.

And it’s no surprise as he revealed a standard year for him has seen him clock up over 80,000 miles in his car.

“It’s been nice after four and a half years of riding in England flat out, riding 10 and a half months,’’ he said.

“Coming out here riding three or four days a week, trialling a couple of days and riding trackwork it’s like a holiday. I don’t mind working hard, I enjoy riding every day.

“Racing is very full on in England, I ride pretty much every morning because there are so many horses at Richard Hannon’s. We turn up every day and are driving so much.

“A lot of the lads here don’t believe the miles that we do, they think I’m exaggerating but sadly not.

“I’ve put 80,000 miles each year on my car the last couple of years - I don’t know what that is in kilometres - and do double meetings.

“So it’s been good to be able to go down to the beach for a coffee and a run or a sweat, it’s a very different life.’’ 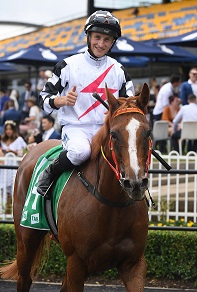 Tom Marquand after a win on Embezzlement at Rosehill (Pic: Steve Hart).

If Marquand was a single lad – his partner is fellow jockey Hollie Doyle – with no major ties he might have just stayed in Sydney and tried his luck full time.

But not only does he have a life he has some unfinished business back home, having landed in Sydney on the back of a career best season, and is eager to build on that.

“Anyone that is involved in racing heavily in England knows it’s some of the best racing in the world there’s so much depth to it,’’ he said.

“I definitely want to get over 100 again. I have less time to do it this year but I’d love to do that again and try to break into that next level of higher class racing.

“My boss has got plenty of horses, I think I had about 400 rides for Richard Hannon alone last year so I have a great boss behind me.

“A lot of trainers have supported me and hopefully more come out of the woodwork and do us a bit of a favour.’’

The Champion Jockey Trophy, won for the last two years by Silvestre De Sousa, is a title he covets as much as his first Group 1 win and that is very much his long term aim.

Marquand came to Sydney with a reputation at home as a jockey headed for the top – one day – and given what unfolded during the summer it’s easy to see why.

He says he left Sydney with a different mindset than when he arrived and the knowledge that he can compete with the best in Australia given the chance.

Who knows where he’ll be later in 2019 when another chance to escape the English winter arises.

“A lot of things can happen in a short time in racing,’’ Marquand said.

“The trainers have been great in accommodating, some of the best trainers here have given me nice rides. It’ll be nice to come back and have everyone know who I am.’’