Elaine's Tower Of Strength Worth Waiting For

Whether they admit it or not trackwork riders always have a favourite horse and for Elaine Robl in late 2017 it was Pirellone. The then three-year-old gelding was a sweetheart, a nice mover and did everything with ease, but with a record of ten starts and not a single place Elaine knew his days as a racehorse were numbered. He’d already been moved from Gabby Englebrecht’s Sydney stables down to Robert and Luke Price’s establishment on the South Coast when owner Shane Duff from Mad About Racing asked Elaine if she wanted him in retirement.

“I didn’t’ have to think about it,” Elaine said. “I thought he’d be suitable for eventing and I missed riding him. Shane told me that Pirellone was going to have one more start at Nowra so I offered to go down and pick him up straight from the track.”

On Monday 15th January 2018 Elaine hitched the float onto her car and set off for Shoalhaven City Turf Club. She watched as Pirellone was sent out a $14 chance in the 2200m BM55 Handicap on a heavy track and couldn’t believe her eyes when he bolted in by more than three lengths.

Kathy O'Hara pilots Pirellone to his one and only win. Credit: Bradley Photos.

“I called Shane again and he said we can’t sack him now so I had to go home without him,” Elaine said with a laugh.

She didn’t have to wait too long to bring him home though. He put in another three lacklustre runs and was formally retired less than two months later after pulling up with cardiac arrhythmia at Kembla Grange.

“I gave him a little break before I started training him,” Elaine said. “My friend Kathy (O’Hara) helped me set up some grids and little jumps. He’s very trainable and always tries his hardest once he understands what you’re asking him to do.”

Elaine and Pirellone’s first outing together was a dressage competition at Camden. They placed 5th in one of their tests but it was the way Pirellone handled himself that impressed Elaine the most.

“The weather was horrendous that day,” she said. “It was blowing a gale but he was so well behaved and he just handled it all. Shane came to watch him that day too.” 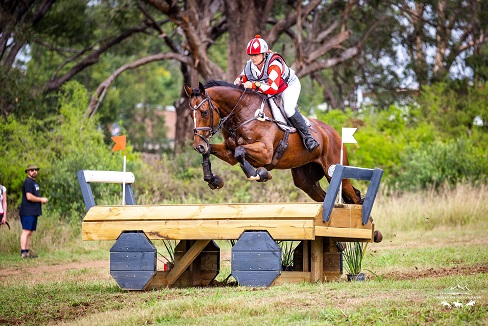 Elaine and Pirellone are already competing at One Star eventing.

Since then Elaine and Pirellone have attended dozens of competitions and continued to improve each time. They’re already competing at One Star eventing and over the weekend they placed 3rd in the Young Horse 1.10m category at the Camden Winter Showjumping Festival.

As a former jockey herself and the wife of jockey-turned-trainer Peter Robl, Elaine is committed to equine welfare and is proud to have been giving retired racehorses a new career for more than 20 years.

“I’ve always had horses off the track,” she said. “I love playing around with them and re-educating them. The Thoroughbred is naturally athletic and such a versatile breed. If you find the right one for the right person you can do anything.”

Finding a suitable home for each retired racehorse is a priority for Shane Duff too.

“We only buy one or two horses each year and they’re raced by close friends and family so they’re almost like a pet to us,” he said. “It’s great to know Pirellone is loved and stimulated in his new home. We get out to watch him whenever we can. My girls love him.”