Eagle The Only Way To Answer Vandyke's Burning Questions

As much as he wants to have the answers and provide them, to trainer David Vandyke there are so many questions that can only be answered when Alligator Blood takes his place in Saturday’s $7.5m Iron Jack Golden Eagle (1500m) at Rosehill Gardens.

He finds himself in what he describes as a grey area that in racing we’re all uncomfortable with. 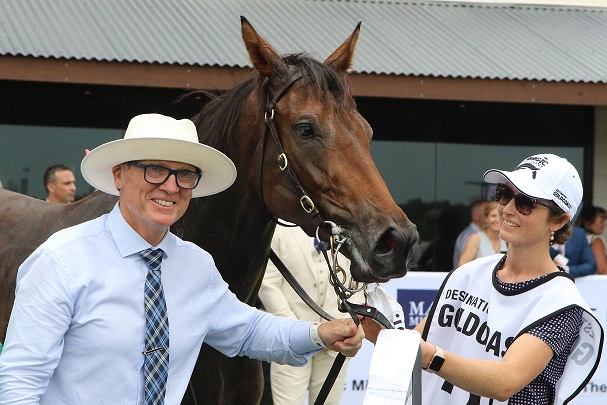 Will Alligator Blood handle a heavy track? Is he racing as well as he was at three? Does he want further? Where will he be in the run?

Those are just a few of the questions swirling around in Vandyke’s head.

“It would be remiss of me to just carelessly say ‘oh you’re going to see him at his best on Saturday’ and ‘don’t worry he’ll handle the track’,’’ he said.

“I think often people are uncomfortable sitting in middle ground. We like to be for or against, we like to be definite and comfortable in a decision one way or the other.

“Do we back him or back against him? That’s the question I guess everyone is asking. I can’t answer that question. I have been able to answer it previously but on this occasion I can’t help.

As it stands Alligator Blood is tracking to start the longest price of his 14 start career as on Thursday he sits at $7 with TAB – so far the $6 when winning the Caulfield Guineas Prelude last year holds that record.

A complicating factor to Vandyke’s assessment of Alligator Blood is the fact he hasn’t been able to see the horse in the flesh for a month since he left the Sunshine Coast for Sydney.

So let’s unpack the burning questions about the gelding who until a week ago was a dominant favourite for Australia’s only feature four-year-old race.

Vandyke describes it as “clutching at straws’’ to point out Alligator Blood’s grand dam Kylikwong and grand sire Casino Prince were placed on a heavy track. But as his sire All Too Hard never raced on a wet track and dam Lake Superior was unraced that’s all there is on pedigree.

Looking any further afield would be only doing more clutching. Vandyke said Alligator Blood has not seen a heavy track in a trial or serious gallop, the worst surface he's struck has been a soft 5.

“I wouldn’t have a clue to be honest,’’ is his blunt answer.

“You can go into a race like some of the races he’s been in and be confident he’s going to win because class will take you a long way.

“But when you’re up against Funstar and others that are proven at Group 1 level on heavy surfaces and he hasn’t run on a soft surface it’s a serious concern and there’s a big question mark.

“There was a soft track in a trial early days, and he only ran second, and I can’t find any audio talking to the jockey and I don’t think he’d even remember because the horse was off the radar at the time.

“It’s bizarre to have a four-year-old who has never been on that surface.”

A late charging first-up third over 1110m, well below his pet trip, and a close second in the Silver Eagle would be enough to convince most that a horse is tracking close to a win.

However, Vandyke has been a harder marker. He wanted to see Alligator Blood tell him he has the same horse he had last season and after the Silver Eagle the jury was still out.

“It was encouraging, he knuckled down, but some would say why didn’t he fight Flit off,’’ he said.

“Why did Flit have the obvious upper hand over the concluding stages? Does that tell us where he is or isn’t?

“It’s an interesting situation to say the least going into this race because wherever he finishes, whether it is first or last, we can make an argument for why he finished there.”

One comment out of the Silver Eagle over 1300m was that Vandyke thought Alligator Blood may be racing like he wants more ground. After all, aside from the Magic Millions which was later taken from him, his supreme performances were at a mile.

“Are we using looking for more ground as an excuse as we often do in racing,’’ he said.

“We see a horse’s performance and it’s not as we hope or expect and we pull out the 'needs more ground' card.”

What has been noticeable to Vandyke this preparation is Alligator Blood has been tardy away twice. It’s not regularly enough to be considered a habit but it is cause for concern.

Assuming none of the emergencies gain a run he’ll jump from gate 12 and it’s important to Vandyke that he doesn’t concede early ground by messing it up at the start.

“He didn’t break cleanly last start and his jump out between races before he went to Sydney he didn’t get away cleanly,’’ he said.

“So the last two times he’s been in the gates he hasn’t jumped. What does that mean and will he jump cleanly on Saturday?

If you’ve read this far you should have a fair grasp on the fact that Vandyke doesn’t know what to expect in the Golden Eagle.

It’s out of his hands and in those of jockey Ryan Maloney. And while it may all seem doom and gloom, don’t mistake it as such. Vandyke has laid it all out.

He doesn’t doubt that Alligator Blood is a quality horse and says the cream can rise to the top. So here’s that scenario.

“If he wins convincingly we’ll all look back and go 'what were we worried about',’’ he said.

“He put in a great first-up run, a really good run against Flit after a trip down from Queensland and he’s come on nicely from that to take on the best four-year-olds at this point in time.

“If he wins we’re all scratching our heads going ‘gee he was a good price’.’’

Ten per cent of the prizemoney won by each horse in the Golden Eagle is donated to a charity selected by the horse's owners and Alligator Blood's charity is Living Legends.

All the fields, form and replays for Saturday's Golden Eagle meeting at Rosehill