Doyle's Now Carving Out His Own Path

It was a moment that stood out to Nathan Doyle – he’d watched star youngster Capitalist’s Golden Slipper campaign be seemingly derailed by a shock defeat and he wondered how the colt’s trainer Peter Snowden would react. 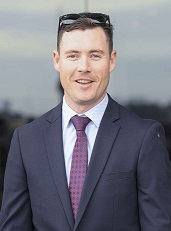 Nathan Doyle is hoping to build on his breakthrough season of 2019-20. (Pic: Bradley Photos).

Doyle was part of Team Snowden at the time and he recalled watching the champion trainer stick with the plan. It’s something that has stayed with him as he prepares to educate his first bunch of youngsters in his second full season back in the training ranks.

The 32-year-old was a revelation in season 2019-20, training 32 winners with an almost 22 per cent strike rate and he says he owes everything to taking the time to learn in Sydney from the likes of the Snowdens and Mark Newnham.

“There’s a reason why the big trainers are successful at what they do. To soak up their knowledge is invaluable,’’ Doyle said.

“I haven’t done it yet but to do it you have to learn off those guys.

“I have to pinch myself just how quickly it has come along for me and I’m excited for the next 12 months.

“We’ve never had yearlings and we have a lovely crop of two-year-olds in the stable which are untried.’’

A lot of trainers will tell you that to build a successful stable you need to know how to manage the two-year-olds.

It’s been four and a half years since Capitalist’s Slipper win and Doyle has been itching to put what he learned at Randwick into action and build on his breakthrough year that gained him a reputation as a trainer to watch.

So far all the success Doyle has achieved has been with tried horses, the likes of Strawb, Café Royale and Royal Banquet, who handed him his first city winner at Warwick Farm in July.

“We have some well bred ones so it’s exciting to have them from scratch, to create their own path and educate them,’’ he said.

“To train a two-year-old is an art. You can overdo it with two-year-olds, you need to have that happy medium to get everything to align to win those good races.

“I was there when Capitalist was beaten before the Slipper and everyone wrote him off.

“But Peter never wrote him off, he was happy with the way he was going and was spot on going into that Slipper and he won it.

So where did Nathan Doyle come from? It’s easy to think he just appeared in the last year or so and knocked up training winners but, like so many in racing, he has quite an interesting back story.

Just over a decade ago, at 21, Doyle gave himself something of a baptism of fire when he took out a training licence and tried to run a stable at Muswellbrook in parallel to being a ‘normal 21-year-old’.

He’ll tell you he’s always wanted to train horses, he preferred watching races to cartoons as a kid and spent plenty of time at the stables of Neville Boyle, his dad’s best mate, taking it all in while his grandfather Ron Langdon worked at what is now Darley’s Kelvinside stud near Aberdeen.

“I was trying to be a normal 21-year-old playing footy with my mates but it doesn’t work,’’ he said. 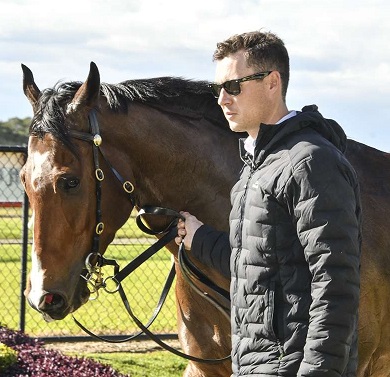 “They demand so much of you the horses. When I came back at 29 I got all of that out of my system.

“With racehorses it’s as much a mental game as it is physical. You’ve got to have a confident animal, it’s the same as any sport.

“You can have the best football side but if they’re not confident within themselves you won’t get results.

“When you have a confident animal you can get them to a level you never thought they’d get to. I love taking horses through their grades, I don’t like throwing them in the deep end or taking them to a race they aren’t suited.”

Doyle says his first winner back, at Dubbo in November 2018 having set up again at Scone, was a special moment as he coaxed his best mate Koby Jennings to make the adventure west to partner Delchuzy to victory.

A race later they were narrowly denied a double as Postmaster General finished a close second.

But it was the move to Newcastle in September last year, after he and partner Melina Gissing secured on course stables, that has proven a huge turning point.

“There were a few doubters but we took a leap of faith, at Scone we weren’t on course and we wanted to train on course,’’ he said.

“When Newcastle Jockey Club offered us boxes we had nothing to lose, we could always say we tried but it’s the best thing we’ve ever done.”

Like anyone trying to make their mark in a cut throat industry Doyle wants to keep improving but makes a point of not setting unrealistic goals.

It’s all about the horse, getting the best out of every horse for their owners and making his presence felt when he brings one to Sydney.

“I’m not satisfied, tomorrow is a new day and you have to find that next one,’’ he said.

“You have to keep striving to be better than what you are. You don’t want to be complacent and going through the motions.

“I never switch off. Mel hates it. I’ll wake up in the middle of the night thinking about something.

“But it’s something that I love, it’s a lifestyle you choose. You have to live and breathe it to be successful. You need to have a little downtime but I rarely find it.

“I’d like to keep increasing the winners each year, and you’d rather be venturing down that highway every Saturday.

“It’s what you do it for. When you’re a young footballer your dream is to play in the NRL so I don’t see why it shouldn’t be the same for a horse trainer to want to compete with the best.’’