As far as star apprentice Robbie Dolan is concerned his whole story is ‘pretty crazy’ and it’ll only get crazier if he snags his first Group 1 at Randwick on Saturday. 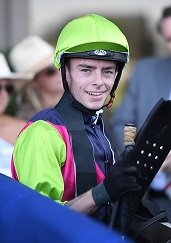 The 23-year-old Irish import rides one of the favourites Scarlet Dream in the Group 1 $750,000 Heineken 3 Metropolitan (2400m) and emerging Godolphin galloper Cascadian in the Group 1 $1m TAB Epsom Handicap (1600m).

We don’t need to go through the Dolan tale again but it’s safe to say when he walked into trainer Mark Newnham’s stables about three years ago, having been rejected by Victoria, he’s just rapt to have been given a chance.

“You need so much luck, the right opinions of the right people, you need to leave that effect on people.

“It’s crazy how just one ride can put you down on the canvas and you ride the next race and it can bring you back to the sky.

“I was only talking to my father the other day about the whole two Group 1 rides on Saturday thing and it’s crazy to think about.

“I’ve worked pretty hard to get here. I feel very blessed and privileged to be in this position.

“I’m still only learning, I’ve got a long way to go but things are on track to where I want to go.’’

Newnham has been preparing Dolan for riding on a level playing field with the senior jockeys since the day he started.

The apprentice already has a Group 1 placing to his name, he rode Easy Eddie into third in the Galaxy in the autumn and posted his first Group 3 win on the same horse in the Maurice McCarten Stakes.

“I’ve said to him before, as his claim reduces he has to improve,’’ Newnham said.

“The same horses he was winning on claiming 3kg, you make a mistake tactically they suddenly run second, third or fourth. The 3kg can cover up some mistakes, once you start to lose the claim you can’t make those errors.

“Robbie’s very unflappable, his demeanour is the same going into any race and that’s a good attribute to have in a young rider.’’

Dolan claims to have never had an argument in three years with Newnham, such is the respect the apprentice has for his master.

“When I first came to Mark looking for an apprenticeship he was only starting his own business,’’ he said.

“For him to focus on helping me when he was only starting up his own future that showed me he was the right man to go to.’’

Dolan has ridden Scarlet Dream four times for two wins, a second and a Group 3 third and his knowledge of her stretches back even further than that first racing preparation.

“I used to ride her as a two-year-old and she wasn’t easy as a younger horse,’’ Dolan said.

“She was full of herself and knew what she wanted, I used to ride her in the afternoons to get her to relax. She’s a lot more relaxed now and she will be a very good chance in this race.’’

The mare, runner-up in the Australian Oaks in the autumn, is tackling the spring staying feature at her third run since that Group 1 classic and Newnham said she’s had a perfect grounding despite having little luck finishing seventh in the Kingston Town Stakes (2000m) two weeks ago.

It’s safe to say Newnham had no hesitation in handing Dolan a big Group 1 opportunity on Scarlet Dream who carries just 50kg in The Metropolitan.

“He’s someone who rides the weight very comfortably and is familiar with the horse, it’s a good situation for us to be in,’’ he said.

“The other day lack of tempo meant she wasn’t going to be a winning chance, you could see that half way around. Her last 200m was really good and she worked through the line.

“I think she still had room to improve from the autumn, it was only her second preparation.

“She’s coming into a handicap down in the weights, on a track that suits her and ground that will suit her.’’

It’s not hard to believe that Dolan, laid back and ‘go with the flow’ as he is, would also have an excellent relationship with his fellow riders.

Horse racing is highly competitive, and during carnival time there’s Group 1 races and millions of dollars in prizemoney at stake. 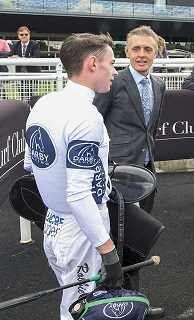 Perhaps it says something about Dolan, and the Sydney jockeys room as a whole, that he can approach champion jockey Kerrin McEvoy for advice on his Epsom mount Cascadian.

McEvoy has been on board the Godolphin import in both his Australian starts but he’ll ride Cameron Handicap winner Rock, one of Cascadian’s major rivals, for Team Hawkes in the $1m feature mile.

“Kerrin is on one of the main dangers but he’s a good fellow and he’ll help you as much as you can,’’ Dolan said.

“Kerrin, James McDonald, Tommy Berry - although they are riding against you they’d be the first ones to give you any pointers.

“I won the apprentice championship last year but even the other day at the races I was asking Tommy about how to hold the stick correctly. Little things. You never stop improving.’’

Cascadian is $11 with TAB in the Epsom and is proven at Group 1 level over 1600m in France.

With barrier two and 50kg on the back of a closing fourth behind Kolding in the Group 3 Bill Ritchie (1400m), where he ran the third fastest last 600m of 35.96 (Punter’s Intelligence) while being held up early in the straight, Dolan knows he’s on a live chance.

“From what I’ve watched of the videos of the horse he looks a big, solid, powerful horse and he was hitting the line strongly the other day,’’ he said.

“He got held up a couple of times and you’d only think once he gets over a mile he’ll be peaking.’’