Billy’s Having A Gem Of A Time Down Under

The story of an English jockey who holidays in Australia and likes it so much they stay is becoming quite common but few would have a tale to tell like Billy Cray.

He may not be a household name at this stage of his career but on his CV the 32-year-old has the unusual distinction of having ridden a winner for Her Majesty The Queen and won a Wallabadah Cup. 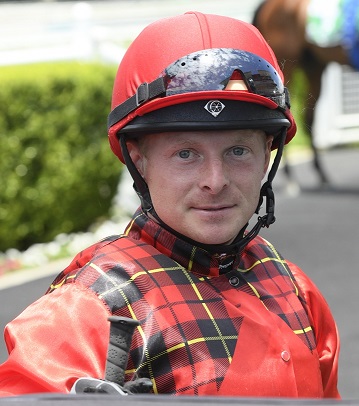 While that win for The Queen came at Wolverhampton, not Royal Ascot, it's still a long way from the once a year meeting 50km south of Tamworth as he claimed the 2018 Cup.

But Cray takes everything in his stride and is relishing the life in country NSW while still yearning for some city success almost five years after his holiday became a permanent stay.

“I was riding back home and one of the other jockeys suggested I go to Bahrain for winter so I went there and one of my friends lived in Sydney so I stopped in for a visit,’’ Cray said.

“I had every intention to go back but I liked it so much I decided to stay.

“I phoned my dad up and said ‘can you send another suitcase and my racing stuff over I want to give it a go here’.”

Initially Cray rode trackwork at Warwick Farm for the likes of Richard Litt and Jarrod Austin but found a home in the Scone area through Jenelle Butler, who sponsored him, and eventually formed a strong team with trainer Scott Singleton.

It’s through Singleton that Cray will chase a third city win with three rides for the trainer at Kensington on Saturday and he says each of them – Remlaps Gem, Rich And Shameless and Partners – have a case to say they can help add to his tally.

“They aren’t there to make up the numbers, I’d like to think one of them can win,’’ he said.

“I’m lucky to be riding for someone like Scott who gives me the chance to go to town and I’ve been lucky a couple of them have run well.

“When he moved up to Scone I just asked him if he wanted me to do some trackwork, we got on well and it started from there.

“Everyone’s aim is to ride in town all the time, you only do it to be the best not for the sake of it.

“But I do enjoy living here and the family is all settled. I really enjoy working for Scott and I’d say I’ll be there until he’s sick of me.”

Remlaps Gem jumps from a brilliant TAB Highway win, Cray’s second Randwick winner, into the Sky Racing Active Handicap (1100m) which is a Benchmark 78 so it’s fair to say he faces a big test.

But after clocking a slick 32.68 (Punter’s Intelligence) for his last 600m in winning last start Cray says it’s a test that’s not beyond him and he’s been offered respect as a $6 chance with TAB.

“I think he’s definitely up to that grade,’’ he said.

“I know he’s only beaten country horses but on what he shows at home he has ability, he has a few little issues but he’ll be a nice horse.”

So far the gelding has won three of his five starts and while unproven on anything worse than a soft 5 Cray is happy to err on the side of believing he’ll handle a wet track if it presents that way.

“Last prep he was going pretty hard but this prep he’s settled down and if he can relax that’s the key to him more than the ground,’’ he said.

“Heavy is always unknown until they’ve raced on it. But I think he will be all right, he’s genuine enough and tries hard.”

Cray didn’t partner Rich And Shameless ($9.50) to his first-up win but is happy to be back on board for the TAB Highway (1400m) knowing the horse has come on since that victory two weeks ago.

It was the first time the gelding had won fresh and that means the bar is set higher to improve on his second-up stats.

“I don’t think it was a bonus win, the horse has always shown something and he was running well at the end of last prep,’’ he said.

“Scott wouldn’t go to town unless he thought he’d run well. I’m sure he thought he might need the run but he knows what he’s doing.

“It’s a little bit further and the ground won’t bother him at all, he likes it soft, and he’s improved at home.”

And front-running sprinter Partners ($17) is expected to lift on his return in a 1000m dash two weeks ago as he steps up in trip in the Agency Real Estate Handicap (1300m).

Singleton had a shot at getting Partners into The Kosciuszko after he posted successive wet track city wins back in the winter and Cray hopes he can return to that form.

“He is what he is, he always puts himself on speed and gives his all,’’ he said.

“I’d imagine he’s a dream ride, he does everything himself and you have to keep him balanced.

“From the feeling he gives at home I think he likes to get away from them a bit and get his own way and I don’t think you can do that over shorter.”