There’s no doubt the South Australian racing industry needs a boost and a Golden Slipper win by Adelaide trainer Chris Bieg would certainly go a way to lifting morale.

The 34-year-old will saddle up Free Of Debt in the Group 1 $3.5m Longines Golden Slipper Stakes (1200m) at Rosehill on Saturday and while the market doesn’t fancy him Bieg says he’s not here to make up the numbers. 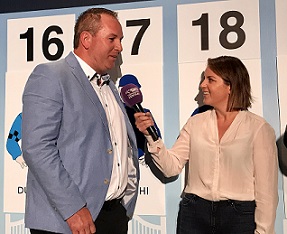 Free Of Debt was a late entry into the Slipper with Aquis Farm paying the $150,000 to secure a start, and they also chipped in prior to the Blue Diamond where he ran a gallant third behind Lyre and Lankan Star - both rivals again this weekend.

Bieg said the colt, $34 with TAB, has settled in well to Sydney and is upbeat about his chances.

“He’s done everything right to date, the first colt home in the Blue Diamond definitely justifies his position,’’ he said.

“It’s an open race but I’m not worried about anyone else, I just make sure my horse is fit and ready to go on Saturday.’’

Free Of Debt had his major clean out before the Slipper with an easy win in a 740m trial ta Randwick on March 14, importantly on a soft 7 track.

Bieg said the trial was important for jockey Dwayne Dunn to have a sit and for the horse to experience the Sydney direction and he was rapt with the post-trial report.

“I wanted Dwayne to keep him out of trouble, there were a lot of unraced horses in the trial,’’ he said.

“So we loaded last, he jumped away positive and was five wide in a 740m trial.

“I was just happy to see him go around but Dwayne said as soon as he balanced and asked the question in the straight he lengthened, got through the ground well to win by three lengths.’’

The barrier draw on Tuesday again caused a shuffle in fortunes for many of the contenders but in Free Of Debt’s case the trainer couldn’t have been happier with 10.

“I’d like him to sit one out and one back, get a good cart up into the race and present him at the 300m mark,’’ he said.

“If we can present him then he’s the fresh legs and I think he should be able to get over the top of them.''

It’s been quite a rise for Bieg, who only took out a trainer’s license in 2011.

He spent 11 years managing Oliver’s Pets and Plants at Morphettville where he dealt with a number of racehorse trainers and the nutritional needs of their horses.

While there has been something of an exodus from South Australia in the past six months Bieg said he’s sticking solid and has faith the outlook will improve.

Free Of Debt wins a Randwick trial on March 14

“It’s all doom and gloom in Adelaide at the moment which is disappointing because it’s an awesome place to train, especially for a younger trainer to get going,’’ he said.

“It can only get better, I truly believe the Government will get behind us again and we’ll pick up.’’

So picturing a Golden Slipper win hasn’t really been on his radar at all.

“I never even dreamed of it, I couldn’t imagine it, I don’t even want to think about it,’’ he said.

“I’d get too excited and wouldn’t be able to sleep…it’d be a massive thrill.’’