All Is Well In Winx's World As Champ Returns

Those three words from Winx’s strapper Umut Odemislioglu are music to the ears of racing fans worldwide. 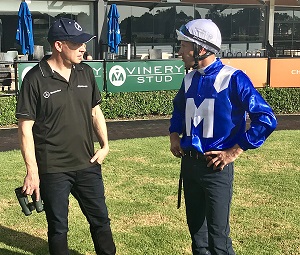 It’s almost inconceivable to think the champion could be any better. She might be more relaxed, fitter than at the same stage last summer and she’s clearly still interested in racing.

Umut wasn’t interviewed like trainer Chris Waller and jockey Hugh Bowman – his job is behind the scenes – but standing next to the country’s best known strapper after Winx walked onto the track the quick question had to be asked.

Winx showed very little had changed as she went through her paces in the 900m trial at Rosehill Gardens, she was slowly away then picked up a couple late finishing seventh behind Endless Drama.

A late surge through the line was what everyone was there to see just to make sure Winx was still Winx in the second half of her seven-year-old year.

“I don’t think there’s too much change and if anything that’s a positive that she’s enjoying herself and not showing any signs of stress,’’ Waller said.

“If anything she looks better than we’ve had her at the same stage.

“We’ve allowed an extra week to get her a little fitter but apart from that it’s business as usual.’’

Bowman continued the theme that Winx is thriving and appears every bit as good now as when we last saw her in the spring.

And he likened her to tennis legend Roger Federer, whose longevity is a testament to his ability not only to play the game but keep himself at peak fitness.

“I do have to pinch myself but I’m reminded when I watched Roger Federer last night at the Australian open, supreme athletes if they love to do it will continue at a high level for a long time,’’ Bowman said.

“The way she is so relaxed now, she really does save it all for game day.

“That was evident at the 200m where she wasn’t going to tack on unless I made her finish the trial off.

“If that was a race I’d have been holding on to her as I was going past the winning bunch.’’

So where to now for Winx? Waller confirmed the plan to be back at the trials at Rosehill on January 29 and flagged a race day exhibition gallop prior to her return.

That return will be the Group 2 Apollo Stakes (1400m) at Royal Randwick on February 16 ahead of what is likely to be an exclusively Sydney autumn campaign.

“Like last preparation it’s one race at a time, we won’t say when the end is, but the Apollo Stakes first-up at Randwick in the middle of February then take one race from there,’’ Waller said.

“We’ll try and let everybody know where we are heading but stress it’s one race at a time.’’

TAB wasted no time in posting Winx a $1.25 favourite to win the Apollo Stakes for the third time in the past four years (she missed 2018 when Hugh Bowman was suspended).

“Winx has already won the Apollo Stakes twice (2016 and 2017) so it is hardly surprising that she has opened $1.25 to stretch her winning streak to 30 races,” TAB’s Gerard Middleton said.

All the results and replays from Tuesday's Rosehill Gardens trials