There’s a little bit of hope among rival trainers that Country Championships favourite Noble Boy could be vulnerable after drawing barrier one in Saturday’s Qualifier at Goulburn. 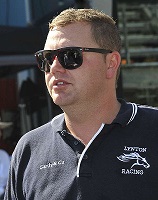 Local trainers Kurt Goldman and Danny Williams both pointed to the inside barrier as a negative for the unbeaten short-priced favourite.

“I told the owners and the staff our best chance of beating Noble Boy was if he drew barrier one and happens to have an unlucky run,’’ Goldman said.

“That’s my, and everybody else’s, best chance of beating a horse like him.’’

Williams said if he trained Noble Boy he’d have preferred the gelding not to have the inside gate and it’ll be up to replacement jockey Jess Taylor to produce a gem.

“It’s a difficult barrier when you don’t have Hugh Bowman or James McDonald on but I’m sure Jess will do a good job,’’ he said.

“It makes it interesting, you would have liked to see him draw midfield somewhere.’’

Goldman had Safe Landing earmarked for this year’s $150,000 SERA Country Championships Qualifier (1400m) about 12 months ago and he said the four-year-old reaches the race in peak shape.

He raced on the pace and held off the likes of Saturday’s rival Common Purpose to win over 1300m and Goldman would envisage him again being prominent, though he’d love an unforecast pre-race shower.

“It’s probably the best I’ve ever had him going, he’s really tightened up after that win at Warwick Farm,’’ he said.

“He’s drawn well, the perfect position for him but he’s going to have to be on his A game to be winning a race like this.

“I earmarked him as this type of horse a year ago but he does bump into what will be the strongest out of the all the qualifiers.’’

Williams is left with Chewbacca, who ran seventh in last year’s Qualifier, after a freak string of mishaps to his other contenders.

Coup De Main suffered a suspensory injury after his first-up win, My Blue Jeans was galloped on last start, Highway Sixtysix ran into a fence and Acquittal was struck in the eye by a clod at his last start and is at Agnes Banks Equine Hospital.

“I’m meticulous with my horses and you can’t help bad luck,’’ he said.

“It makes you think about the marvellous job they’ve done with Winx not only to win 30 races in a row but to keep her going as a seven-year-old.’’

Chewbacca is a horse that, if he has a stroke of overdue luck, is capable of being competitive as he showed a year ago at what was just his fourth start.

He pulled up lame after running fifth behind Royal Witness at Randwick last Wednesday but a day later vetted all clear.

“It’s not been a perfect preparation, it’s been a trainwreck really,’’ Williams said.

“He’s definitely good enough, he has the ability but it has been a fight against time with him. He’s there so we’ll wait and see.’’

Both Safe Landing and Chewbacca are on the $11 line with TAB for Saturday’s Qualifier and are also at $26 in the all-market behind Noble Boy ($3.50) for the $500,000 Newhaven Park Country Championships Final (1400m) at Royal Randwick on April 6.

All the fields, form and replays for Saturday's Country Championships meeting at Goulburn