The Magic Moment Mal Wasn't There To Witness

It’s all about being in the right place at the right time!

That was former champion jockey Mal Johnston’s summation of his first winner as a trainer in more than three years on Thursday – but ironically he was in the “wrong place”. 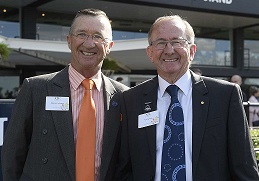 Johnston, inducted into the Australian Racing Hall Of Fame last year, won the 4YO & Upwards Maiden Handicap (1600m) at Wyong with Golden Creek ($3.50 favorite), but wasn’t there to see it.

Instead, he was at the corresponding Wellington meeting where his representative Scarpa ($2.50 favorite) went close to giving him a two-track double, finishing third in the Maiden Handicap (1400m).

“Trust me to be in the wrong place,” Johnston joked.

“I went to Wellington because I’m speaking at a Back To Nyngan rugby league function this evening (Friday) for my great mate Rodney Robb (Nyngan trainer).

“Rodney and I go back a long way; I rode for him when he brought horses to Sydney in the late 1970s.”

Johnston has endured 19 frustrating minor placings since Quite Frankly (Scarpa’s older half-brother) won a 3YO Maiden Handicap (1307m) at Orange on April 19, 2016.

“I was starting to wonder if I would ever win another race,” Johnston said.

“I’ve only got a small team of half a dozen horses in work; a few have fallen by the wayside.

“What else do you do? I love the game and love pottering along with them.”

Johnston, who won three Sydney jockey’s premierships (the first as an apprentice with 107.5 wins) and rode the champion Kingston Town to 25 of his 30 wins (including the 1980 Cox Plate), is the third trainer at Hawkesbury of Thursday's winner Golden Creek.

“The horse came to me when Tommy Wong (disqualified for 10 months by stewards last November over a swab irregularity) was outed,” Johnston explained.

“Golden Creek’s recent runs have been pretty solid, and it was simply a matter of him being in the right place at the right time.

“It was a very average 1600m Maiden, he was fit and well, the distance suited, the favorite (Whitney’s Star) was scratched at the barrier after rearing and striking her head, and he got a gun ride.

“I rang Grant Buckley to ride him but he was going to Wellington, then Chad Lever (who wasn’t riding) and finally my old mate Corey Brown, who did a terrific job.

“Hopefully, we can find another suitable race for Golden Creek in the coming weeks.”

Golden Creek breaks through at Wyong on June 6

Johnston became the 24th Hawkesbury trainer to win at least one race this season, and Golden Creek was Hawkesbury’s 140th winner so far this season.

Rookie Hawkesbury apprentice Atsu Maeda was unable to get Johnston a double by winning on Scarpa at Wellington, but later landed the second winner of his career by scoring on Sugar Dance in the Benchmark 74 Handicap (1400m).

“Atsu is apprenticed to Marty McInerney at Hawkesbury, and has been riding work for me for three years,” Johnston said.

“He is the loveliest kid, and only recently got his licence to ride in races.

“His first winner was on Atum for Bernie Kelly (now based at Scone) at Wellington on May 20.”