As he prepares under rated mare Sky Call for her shot at glory at The Star Championships, Albury trainer Mitchell Beer says the past couple of weeks has been both a nightmare and an amazing time for his stable.

Anyone following Beer on social media would be well aware just how much it means to him to have Southern Districts Qualifier winner Sky Call representing him Saturday’s $400,000 Newhaven Park Country Championships Final (1400m) at Royal Randwick. 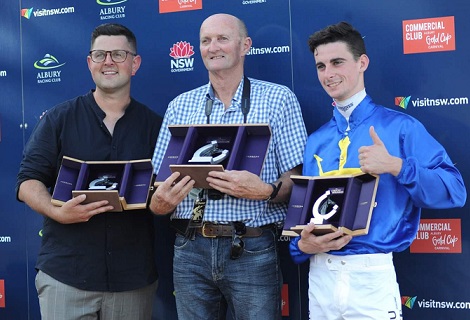 And with that race under a week away, Beer paid tribute to his staff who have turned their lives upside down to keep the stable going in the face of the Coronavirus crisis.

Strict protocols imposed on participants, aimed at keeping racing at a distance from the impact of the virus, haven’t been easy to adjust to but he said everyone is going above and beyond to ensure racing continues and that would make a Country Championships win even more rewarding.

“Our staff and our owners have been nothing short of terrific,’’ Beer said.

“Our farrier is currently living with us, they’ve moved from Victoria because I would have been without one, we have staff staying at friends’ places and family’s places to stay on this side of the border.

“We’re taking temperatures, we have washout stations. There was no stone unturned at Rosehill on Saturday, it was just phenomenal, and everyone complied.

“It’s been a testing time but everyone is under no illusion that if we don’t get it right we are all out of a job, including me.

“When Hanger ran second on Saturday it felt like I’d won a Group race because of the amount of effort going into keeping everything ticking on. It makes it worthwhile.’’

It seems like months ago when Sky Call won that SDRA Qualifier on her home track where she defeated now three-time finalist Bennelong Dancer – it was February 22 – and Beer said he couldn’t be happier with her preparation for her grand final at Randwick.

The four-year-old had a short break after that win and returned a month later with a close third over 1175m at Albury.

“I think she is going as good if not better than Hanger and he measured up on the weekend,’’ Beer said.

“Everything has fallen into place. I thought her hitout in between couldn’t have been any better against open handicap sprinters.

“She’s just come on so well. My sister (Ash) rides her all her work, she galloped on Friday morning and was of the opinion that was the best piece of work she has ever put in.

“Timing is everything, we are going into Saturday just full of confidence.’’

This is a $26 chance with TAB that Beer is talking about and the four-year-old will be ridden by Glen Boss, who has done the job for Beer in a Group race in the past, in the final.

Sky Call has been ridden by Teo Nugent at her past two starts but with the restrictions on interstate travel the Victorian based jockey had to be replaced.

“Bossy won a Group 3 for me when I was training at Mornington, he won the Typhoon Tracy Stakes, so it is good to partner up again.

“We do our job and when you leg someone like him on you’re pretty confident they will do theirs.”

Beer said he understands why the Country Championships prizemoney had to be reduced by $100,000 and that won’t impact his desire, or that of any other finalist, to lift the trophy.

On Sunday, Racing NSW announced that the 10 Championships races staged on April 4 and 11 would have their prizemoney reduced by 50 per cent and the Country and Provincial Championships by 20 per cent.

“It’s still fantastic prizemoney, anything we can do to keep (racing) going,’’ Beer said.

“Racing NSW has dished out a phenomenal amount of money for all races, not just the Country Championships, and they’ve taken a massive hit.

“It’s only fair for the show to go on that we take a little one as well.