'Super' Farrer Punters To Saddle Up Again For Kosciuszko

Members of the wildly successful William Farrer Hotel Super Punters Club have become racehorse owners off their back of the success in the inaugural The Kosciuszko and are going deep again in a bid to win a slot in this year’s race.

David Barnhill, the former NSW State of Origin rugby league star who is the owner-licensee of the popular pub at Wagga Wagga, said the punters' club spent about $30,000 on Kosciuszko tickets last year and was shaping up to invest a similar amount in this year’s draw.

Last year, the punters won a slot and initially did a deal to have the early favourite Care To Think run for them. But when that horse was scratched they did a late deal with connections of the Jenny Graham-trained Awesome Pluck, which ended up finishing third.

But their share of the rich prizemoney wasn’t all.

The hotel won two free $5000 bets from TAB for selling the most Kosciuszko tickets of not just any country outlet but also the most overall in NSW and one of those bets – invested by the hotel on behalf of the punters – came up trumps. 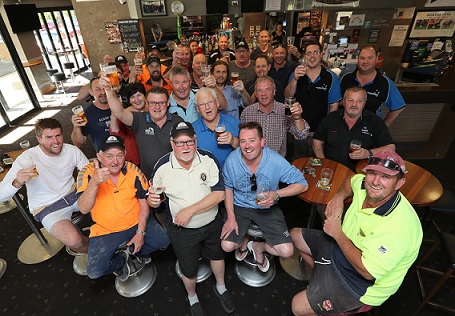 The Wagga William Farrer's Punters Club, which has 400 odd members, are chasing another slot in the $1.3 million Kosciuszko. (Pic: Les Smith)

“There were about 100 of us in a marquee at Randwick and it was off the charts. Just coming third we were happy with the money from that, but when Redzel won The Everest to clinch that bet it was like we owned Redzel.

“We certainly partied like we owned it! We all went back to the Royal Oak at Double Bay that night for a huge celebration. It was a great night, pretty special.”

Barnhill described the Farrer Hotel group as the “self-rated world’s biggest punters club” and he may well be right. The number of teams has grown from 115 last year to 140 and has now been capped at that.

The Farrer has effectively provided the template for other pubs with punters clubs who dream of drawing a horse in The Kosciuszko and experiencing the thrill the punters from Wagga did.

“We had about 500 people in the Kosciuszko syndicate last year and this year we’ve got about 650 in the punters club, trying for a slot again,” he said.

“It’s a lottery, so anything can happen. I remember talking to one of the other slot-holders last year and he said he bought just five tickets.

"You have to be prepared to miss out. But we’ll be in it with a good shot and we’ll be hoping to get lucky and win a slot again.

“We had a lot of fun last year. There was a lot of great PR for the pub and the punters’ club. Everyone had a good time and on top of that we got a great return.

“We’ve got a bloke called The Wolf who runs the show here for the punters club and he came up with the idea that we distribute $104,000 among the punting teams and keep the other 104K to buy shares in some horses.

“We’ve bought into four so far - two from Triple Crown, plus another that’s with Bjorn Baker and one with Mick Price in Melbourne. Shares of between five and 10 per cent in three yearlings and a two-year-old. It’s a punter’s dream to own a horse in Sydney or Melbourne and we’re living that.

“We’ve still got some of those funds left over and we’re looking at buying a share in another horse from Ireland that’s coming out to try for a crack at the cup.

"About 20 of the punters club teams had already thrown in an extra $1000 each to buy a share in a stayer from England that will hopefully get to the cup. Mick Price has got it. They have to change the name because it’s called Starcaster and there’s already a Starcaster in Australia.

“All of this has come from a bunch of blokes getting together and enjoying a beer and a punt and investing in a plan to try and get lucky. It’s been a fantastic ride for everyone involved.”

Tickets for the $1.3m The Kosciuszko (1200m) at Royal Randwick on October 19 are available at all TAB outlets and via the TAB app for $5 each until 11.59pm on Sunday 8 September.