Smith Has Diablo Set To Change His Championships Luck

Trainer David Smith is approaching Sunday’s $150,000 CDRA Country Championships Qualifier (1400m) at his home track of Mudgee with the somewhat bullish view that Bel Diablo is finally heading to Randwick.

The five-year-old hasn’t had a great deal of fortune when it comes to the Country Championships so far but Smith is hoping it will be third time lucky for Bel Diablo in 2020. 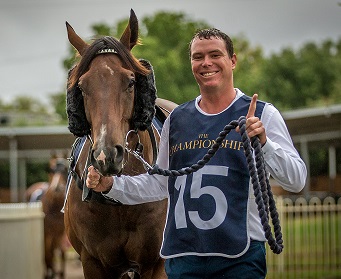 Smith was preparing the gelding for the race last year but a virus forced him out while he ran a respectable fifth in 2018, as a three-year-old, but he didn’t handle the heavy conditions and the race being run in a downpour.

“The decision to aim at the race again was made after we pulled the pin on him last year, we’ve always thought he’d at least win a heat out this way and be competitive in the Final,’’ Smith said.

“It could be a blessing in disguise because he’s really matured and physically he’s a much bigger, powerful, horse now so hopefully we see the best of him.

“He’s going in about 80 per cent fit, we are expecting him to make the final and that’s why we haven’t screwed him right down yet.’’

Smith is no stranger to qualifying a horse for the $500,000 Newhaven Park Country Championships Final (1400m) – back in 2017 he won the Central Districts heat with Distinctive Look – and he clearly has plenty of time for his main contender this time around.

Bel Diablo has won five of his 17 starts and will be having his first start since mid-August on Sunday. Two starts ago, back in July, he ticked an important box when it comes to the Country Championships by winning at Canterbury.

“It seems from the other qualifiers you need that Benchmark 70 grade horse in town and two starts back that’s what he won at Canterbury,’’ he said.

“He’s on the right track and would be one of the better credentialed horses in the field. I think the timing is right looking at how he’s come up.

“We’ve done a fair bit of work with him, ideally we would have liked that first up run (he was due to resume at Randwick on February 15) but we weren’t going to bust him on a wet track in town. We opted for a third trial instead.’’

The 35-year-old grew up in Dunedoo and has had some interesting jobs prior to taking up training some six years ago including working on a cattle farm, he’s been involved in the breeding industry and he worked for leading trainer John O’Shea for four years.

Interestingly, Smith pointed out that he wouldn’t need too many fingers to count the number of winners he’s trained on his home track – the number is two – but he points out he does little of his training on the Mudgee course and has had limited starters there.

But he’s confident, given a good surface this time, Bel Diablo is on target to improve on that record.

“We don’t train on course, we have our own property just out of town and when we want to give them a good hit out we go in but all the other work is done at home,’’ he said.

“You’ve got a good run to find your positions, then it’s one big long turn into a long home straight with a bit of an uphill rise at the end of it.

Bel Diablo is rated a $26 chance with TAB to win the Final at Randwick on April 4 and you can write your own ticket about Smith’s other contender which is Captain Jimmy who will be having this third start for the stable on Sunday.

Captain Jimmy won two of his first four starts for Victorian trainers Trent Busuttin and Natalie Young and Smith said while his two runs have been poor off a two year break there’s talent in the locker if the gelding wants to use it.

“I still think he’s a real dark horse if he turns up on the day,’’ he said.

“Off his trackwork it wouldn’t shock me to see him win it. He’s a nice big horse with a good stride on him and very athletic. He can run some pretty quick time on the track

“He went sore in his Bathurst run over his back, it took us a while to get on top of it, but I wasn’t too disappointed with his Dubbo run. He missed the kick and never travelled, found a length and held it to the line.’’

First and second from the Mudgee Qualifier earn places in the $500,000 Newhaven Park Country Championships Final (1400m) at Royal Randwick on April 4.

All the entries, form and replays for Sunday's Country Championships meeting at Mudgee