There is some rivalry when Nathan Sinclair races against his dad Peter but, in the main, it’s ongoing inspiration, love, courage and unshakable faith.

The latest in the generations of Moree trainers and riders have overcome obstacles that near defy belief and they'll compete with numerous form runners throughout Monday’s Gunnedah TAB meeting.

Nathan was not expected to survive when he was born with spina bifida, and kidney failure, and previously Peter and his wife Jenny endured the heartbreak of a still-born daughter Kayla.

Nathan lost the use of his legs and then his kidneys started to fail.

Peter donated a kidney that was compatible and Nathan continued his fight. And when he turned 18, he had Kayla’s name tattooed on his shoulder.

Nathan didn’t just exist either. If the youngster needed callipers to walk, he discarded them to ride in his local pony clubs. With either Peter or Jenny in proximity, Nathan learned to juggle the callipers to mount and dismount and then graduated to a quad bike. 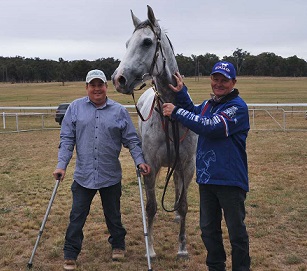 Locals at the pony clubs and eventually the races, were both incredulous and amazed. Eventually Nathan became advanced enough to take out a training license in 2007 and teamed with Peter who rode their small team track-work.

In the last season, Nathan trained his 50th winner and success has been regular enough for him.

Peter, a racing institution in the North West, recently passed 600 career wins following in the racing traditions of his father, grandfather and great grandfather.

At recent regional meetings, Nathan has won with Ringside and Pretext’s Dream who head into Monday’s TAB meeting. Peter has enjoyed local success with Upstart, Track Flash, Free Billy and Master Cramsie all engaged at Gunnedah.

“We’re just so proud of what he’s been able to achieve - we don’t just train together, we do most of the things that a father and son do,” Peter enthused.

“We’re just getting ready to take a couple of horses up to Talwood in Queensland, dirt track once a year picnic meeting - fantastic, we’re regulars.

“Nathan shares the driving. He’s got a special hand lever installed as he can’t use his legs.

“When we go pig hunting together in the bush with mates Nathan leaves his walking sticks in the truck, gets on a four-wheel quad runner and takes his favourite dogs.

“He’s got no fear, he’s stacked it before. But he just gets up again and keeps going like he has all of his life.

“He’s a great kid, he’s got a video at home of the first time he beat me in a race. When he gets me he always plays it to take the p... out of me. I do the same when I beat him.

Nathan thrives on the banter.

“Dad and I always give it to each other when we race,” he laughs.

“I’ve just come back from a big pig hunting comp up at St George in Queensland. Leave the sticks in the ute and get on a quad bike. We didn’t do any good this year but I had some fun, I’ll tell you.”

And so what about prospects for Gunnedah on Monday?

“No real standouts for me - I’ve got three in one race and can’t split Upstart and Free Billy,” Peter offers.

“Upstart put a couple of wins together in weaker grade and I’ve ridden him some nice work.”

Nathan is the more confident - “Ringside went really well winning a maiden and he’s progressed, nice type, I like him.”

Ringside takes on Peter’s Master Cramsie in the final event. “Dad’s is coming off picnic form, but it’s won four races and placed at a TAB, we’ll see.”

The timing could be right to get out that old video.

All the fields, form and replays for Monday's Gunnedah meeting