Coffs Harbour trainer Donna Grisedale has had to endure a tough few months, but she will certainly get a lift at Grafton on Monday if her lightly-raced mare Shirazzle can return to the winner’s list at just her second start back from a long lay-off.

Grisedale and her jockey husband Jon moved to Coffs Harbour earlier this year after being based at Kembla Grange for the previous seven years.

But Jon has been sidelined since a nasty fall at Lismore on August 12 when he was knocked unconscious and sustained fractures to his foot, ankle, wrist and collarbone. 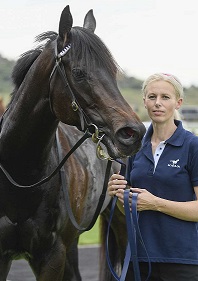 “With Jon sidelined and not been able to ride work, it’s been a real hard slog for the past few months,” said Donna.

“He suffered the fractures on both sides of his body – two on the left and two on the right. But you can’t keep him down. He’s just started back riding trackwork and, at this stage, he hopes to be back riding in races on Melbourne Cup Day (November 5).”

Veteran sprinter Waltzing Willie has won a couple of races for the stable in recent weeks, and Grisedale expects Shirazzle and Bondi Boy to both run well in their respective races on Monday.

Shirazzle only returned to the racetrack at Lismore on September 19 when she finished the race off strongly to finish second to My Cousin Steve in a Class 1 over 1200m. That was her first outing for almost 18 months.

“She was initially sidelined after having a knee operation and then her breeder and owner David Fuller passed away about the same time we moved here to Coffs Harbour,” said Grisedale.

“David raced a lot of horses over the years - with me and other trainers like Chris Waller. One of his best horses was Metal Bender.”

Metal Bender, trained by Jack Denham and then by Chris Waller, was a multiple Group One winner with victories in the 2009 Randwick Guineas and Rosehill Guineas, the 2010 Doomben Cup and the 2012 George Ryder Stakes.

After some uncertainty about the future of Mr Fuller’s horses, Grisedale eventually kept Shirazzle and was able to start working on her comeback to racing.

Now a five-year-old, Shirazzle has had just seven starts for one win and three minor placings. Grisedale was delighted to see her run so well when she resumed at Lismore.

“She’s always shown ability and it was great to see her perform first-up after such a long lay-off,” she said.

“She’s had a month between runs, mainly because I’ve found it hard to place her, even though she’s a Class 1 horse.

“The top three in Monday’s race (Shirazzle, Shezandi As and One For Betty) look like they’ll fight the race out. Shirazzle certainly has the ability to win, but the wide gate (barrier 11) hasn’t helped."

Grisedale is planning to aim both Shirazzle and Bondi Boy towards next year’s Country Championships.

Bondi Boy, formerly trained by Richard and Michael Freedman, has his first run for Grisedale in Monday’s Class 1. He has been a consistent performer, winning just one of his 11 starts, but finishing in the placings six times.

His last outing for the Freedmans was at Kembla Grange on September 14 when he finished sixth in a Class 3 over 1400m.

“I’ve only had Bondi Boy a couple of weeks so I’m still on a bit of a learning curve with him,” she said.

“He’s dropping back to 1100m but I don’t see that as a bad thing. He’s down in class and a track in the soft range would suit him, as it also would suit Shirazzle.

“He’s been a horse who has run plenty of placings but has found it hard to win, but on some of his best runs at Wyong and Hawkesbury, he should be very competitive in Monday’s race.

“I’m hoping to target the Country Championships early next year with both these horses, so I’ll have to place them right and try and get their Benchmark points up.”

All the fields, form and replays for Monday's meeting at Grafton