It’s a good thing Goulburn trainer Danielle Seib is an accomplished educator because her Country Championships hopeful Assault’n’bathory was once a real problem child. 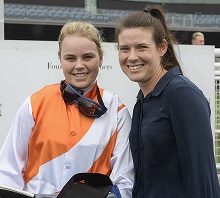 Seib, 25, juggles her growing team of horses with teaching at Crookwell High School and says while the six-year-old has tested her patience he’s made her a better trainer.

Assault’n’bathory didn’t make his debut until he was a late season four-year-old but it’s a testament to the work Seib has done with him that he’s heading to Moruya on Sunday for the $150,000 SERA Country Championships Qualifier (1400m).

“He took a long time to mature, physically and mentally but mainly mentally,’’ Seib said.

“He could get a little bit hot in trackwork, he took plenty of time to learn to gallop on the bridle and put it all together. He's a decent sized horse and took a long time to fill out and come into himself.

“The patience has paid off with him and putting blinkers on was the making of him, he's a lot more tractable with them on and his racing manners are a lot better.’’

The gelding was still a maiden when the 2019 Country Championships series was run and won but he’s won four of his last nine starts and a Highway win in September told Seib he had earned his shot.

He backed that win up with another Highway win at Randwick on January 11 and had his final lead-up against Benchmark horses at Randwick three weeks later where he finished a respectable fifth.

Seib said that second-up run was a real test for Assault’n’bathory and has him in prime condition to tackle the expected wet track at Nowra.

“When he won first-up he showed he could win on a good and heavy track and we knew we were in with a bit of a chance,’’ she said.

“He ran really well last time, he probably just got outsprinted against that calibre of horse. It was testing and trying conditions too.

“In hindsight it's a fantastic move that he's had the two runs under his belt, it was a good hitout for him the other day because you want a rock hard fit horse going into this qualifier.

Jockey Winona Costin will continue her partnership with Assault’n’bathory in the Qualifier while for Seib a top two finish and earning a spot in the $500,000 Newhaven Park Country Championships Final (1400m) at Randwick on April 4 would be a massive career boost.

Seib only graduated from university last year and school teaching is her back-up while she builds her team of nine horses.

And she’s become something of a minor celebrity with her Crookwell High students since they realised she’s trained a horse to win in Sydney.

Assault'n'bathory wins at Randwick on January 11

“I'm hoping to do less teaching in the future,’’ she said.

“We're building a stable complex across the road from where we are, 20 stables we're going to give it a proper crack.

“You've just got to trust your gut and back yourself and he's been a good horse to teach me a lot. He's taught me as much as I've taught him.

“The coverage I've had is phenomenal. The Highway races are fabulous exposure and this is another step. It's a very strong area, you need to have a real up and coming horse I think.’’

The 2019 Country Championships winner Noble Boy hailed from the South East District though he was unplaced in the SERA Qualifier and won his way to Randwick through the Wild Card at Muswellbrook.

Assault’n’bathory is a $26 chance in TAB’s all-in market for the April 4 Final. The current favourite at $8 is the Matthew Dale-trained Notation and a decision on whether she takes her place at Nowra will be made later in the week.

All the entries, form and replays for Sunday's Country Championships meeting at Nowra