Champion country jockey Greg Ryan is sure he’s on the best horse in Sunday’s $150,000 WRA Country Championships Qualifier (1400m) at Dubbo in favourite A Martin Placepick but he has a small word of caution for those who think the top weight is over the line.

Ryan has ridden more winners than any other jockey in NSW so far this season, something that’s not unusual, and having lived in Dubbo for 20 years can speak with authority about the local qualifier.

A Martin Placepick has earned the 59kg, and top billing for the race, through five wins from 13 starts but Ryan said if the gelding does win as many expect there may be some scary moments.

“He doesn't seem to be the sort of horse to chase them down and keep going,’’ Ryan said.

“He gets to them and doesn't seem to do much more. He was the same last preparation.

“I couldn't see him jumping out of the ground and streeting them.’’ 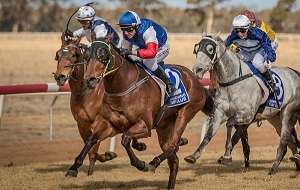 The 53-year-old hoop is chasing his first win in the Dubbo Qualifier, his best result was a second on Yes Zariz in 2015, and has four wins and a second from five rides on A Martin Placepick.

The latest of those was at Parkes on January 31 and he guided the lightly raced six-year-old, trained at Coonamble by Cecil Hodgson, to a narrow second-up win under 61kg.

Third in the race was Thermosa and that galloper is one of two horses, the other being Dubbo-trained Westlink, who Ryan says pose a big threat to A Martin Placepick.

“Thermosa was in the Parkes race and had a fair bit of pressure put on it by other runners,’’ Ryan said.

“If it was able to get some cheap sectionals it could kick at the top of the straight and be hard to run down.

“I thought Westlink's run at Wellington the other day was very good. He didn't have much luck and he made up very nice ground.

“(A Martin Placepick) is not a shoo-in, they are definite threats to him. But he does look to be the best horse in the race.’’

Despite his cautious words, Ryan said A Martin Placepick has been given the ideal lead up to the Qualifier with his first-up second at Gilgandra followed by the Parkes win.

“There were five or six on pace runners in the Parkes race and it was well set up for him with the speed,’’ Ryan said.

“He was one off the fence nicely covered up and was able to track into it. It was a good run because Parkes is a track where it's easy to become a victim of the pace because they can drop anchor.

“You just can't take anything away from the horse, he just keeps doing the job.’’