Ryan was suspended for causing interference in the second race of the Cup meeting, became ill and was stood down for the remainder of the day. 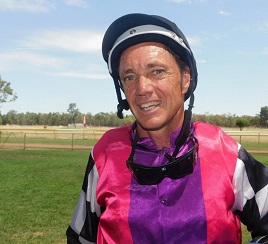 He was on numerous winning chances, including the Cup that he has won on numerous occasions and has sentiment attached. Ryan’s short suspension starts next Tuesday and expires on Monday the 13th on which day he can ride.

However, on Friday that won’t be the slightest concern for the masses of regional Ryan followers. He is set for a booming day with a typical full book on an eight-race programme. Ryan will be riding short favourites for Allan Denham and Bjorn Baker.

A treble or even better is distinct possibility for the record breaking veteran.

While his association with the prolific regional winning stable of Baker is in a third season, Ryan goes back decades with the Denham family.

Baker's Racing Manager Jack Bruce, with the stable in a winning vein, gave an insight into their runners.

“Korrawi has been building up for a win with three runs back and trials - lovely filly,” Bruce enthused.

“Those ‘1000’s were too short for her, she’s out to her right distance with the fitness levels where we want them now. Her sire Declaration Of War was a quality miler in Europe so logically she’ll get further.

“If there’s any concern it’s 60.5 kg when they’re lightly raced but she a strongly built filly who should handle it. We like her.”

He’s A Hot Shot has a similar impost.

“We scratched him from Wyong for a more suitable race here, still raw and learning but loads of ability,'' he said.

“He won well at Mudgee ($1.45) and he’s nowhere near the finished article.

“We’ve got the blinkers on him again and he’ll also appreciate out in distance from the ‘1000’. Hard to beat.”

Ryan and Denham have strong prospects and form lines with Sheeran, Nitride and Have Not in respective races. One of the better bets on the day is the Kris Lees trained Itz Lily in the sixth event.

She was beaten in a photo at Newcastle by her three-race winning stable mate Mystic Hill who started favourite and was close up in a far tougher race won by the Baker’s Vega at Warwick farm on Wednesday.

Muswellbrook at present has a good four rating in overcast conditions.

All the fields, form and replays for Friday's Muswellbrook