A sea of green awaits the Country Championships hopefuls that arrive at Coonamble in March thanks to a rebuild of the track and the added benefits from a year of good rain.

Coonamble Jockey Club vice president Mick Heaney said track upgrades, which began in 2019, have included laying 1800 squares of turf, a $60,000 irrigation system installed in the amenities area and the soon to be completed addition of new horse wash bays.

The contrast (seen below) in pictures taken when the track was stripped and re-laid to what is there now is nothing short of amazing, especially taking into account the drought stricken surrounds when the work began.

“We’ve been getting falls of an inch to 40 millimetres, we’ve been able to apply our fertilizers with rainwater which you can’t beat.” 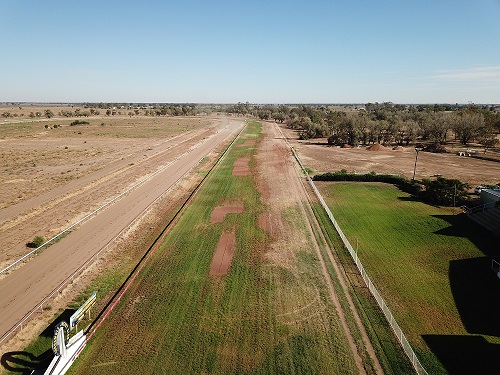 Coonamble early in its track rebuild in March 2019 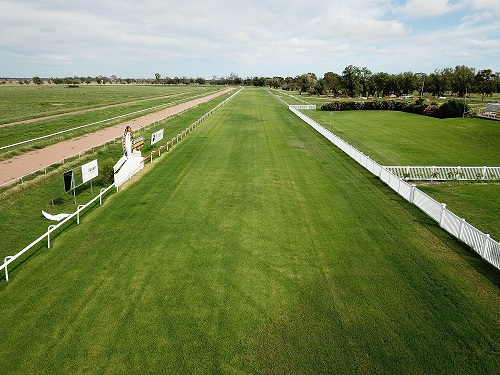 Plenty of green to be seen in this January 2021 image

When the surface was given its first big test, hosting the Western Districts Country Championships a year ago, it received high praise from champion jockey Hugh Bowman who ventured to Coonamble for the meeting.

“I can’t speak highly enough of this track, there’s obviously been a lot of work and commitment go into it but the surface is extraordinary,’’ Bowman said after he rode a winner at Coonamble.

“It’s a credit to everyone involved.”

Heaney is confident Bowman will like what he sees if he makes the trip again in 2021.

The flow on effect from hosting a Country Championships meeting has been evident at Coonamble, a town which battled through a drought of more than three years, much to the delight of committee members who offers its time voluntarily.

“We are getting sponsors coming to us wanting to sponsor our race meetings which tells you something is right,’’ Heaney said.

“That’s how popular it has become and the name the club has got.”

Plans are well advanced to ensure Coonamble’s second staging of the $150,000 Western Districts Qualifier is bigger and better in 2021 and there’s already a buzz around the town.

Further improvements to the track and facilities will be aided by a charity auction and there will again be a Calcutta on race eve after the inaugural event raised over $30,000.

Heaney said although the Covid regulations at the time may have an impact on crowds the club learned a lot from last year as the meeting was staged in the early months of the pandemic.

“There were people who came to the races that day who had never been on a race track,’’ he said.

“Since then we’ve got people involved with horses who haven’t had a racehorse before.

“It’s given us a good base. The town is already talking about it.

“I don’t know that you’d find an event in the town, or a club or committee in the bush, that is going any better.

“It’s a good feel and it comes back to what Peter V’landys has done with racing I think. It starts from the top and filters down.”

Dubbo trainer Kody Nestor provided the quinella with Sneak Preview and Fast Talking in 2020 and will no doubt be back at Coonamble for the $150,000 Western Districts Country Championships Qualifier (1400m) on Sunday March 14.