Dubbo trainer Kody Nestor is on the cusp of a slice of Country Championships history at Coonamble on Sunday as he attempts to be the first to win a Qualifier as both a jockey and a trainer.

Nestor won the inaugural Western Districts heat in 2015 on board Dane De Lago, trained by his uncle Peter Nestor, and rode that horse in the Final at Royal Randwick.

It’ll be the 29-year-old’s first foray into the $150,000 WDRA Country Championships Qualifier (1400m) as a trainer and he’s quietly confident at least one of his quartet - Fast Talking, Sneak Preview, Miss Academy and Toulon Brook – can take him back to Randwick.

“It was a big thrill to win the first year,’’ Nestor said.

“I remember the horse had 56kg and I couldn’t wait to have a drink when I got off him. I used to waste pretty hard back then.

“It was a bit unknown how it was all going to take off so to win it was exciting, especially at my home track and for my uncle. I’d like to think I can repeat it this year.’’

Nestor turned his hand to training not long after winning at his final race ride as a jockey, at Dubbo in November 2017, and says the Country Championships is massive for someone like him.

He realises there are stronger racing areas in NSW than the Western Districts but the area has produced a placegetter in a Country Championships Final (Not For Export ran third in 2017).

“If you have a horse that is half handy in this area I think it is a benefit to be out here,’’ he said.

“You don’t need a high rating to get into the race, not like Tamworth and some of the other heats, so that works to our advantage.

“I identified Toulon Brook, Fast Talking and Sneak Preview a while ago to head this way, they had the right profile and their benchmark was never going to be a drama so I’ve never had to worry about it.

“For an average country trainer like myself if it is something you look forward to every year. 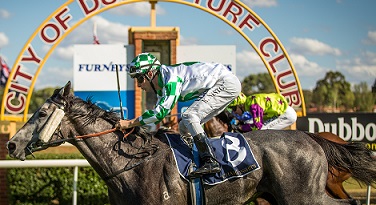 Kody Nestor rides Dane De Lago to victory in the 2015 Qualifier at Dubbo.

“It’s the pinnacle for the average country trainer to run in a race like this. You think of Scone Cups, Wagga Cups, Albury Cups, Grafton Cups and Ramornies, to the average trainer they are out of reach but to win a heat is within reach for us.

“You’re taking on horses in your own area, the concept is brilliant as far as I’m concerned.’’

Fast Talking and Sneak Preview are both $26 in TAB’s all-in market for the $500,000 Newhaven Park Country Championships Final (1400m) at Royal Randwick on April 4 and Nestor considers that duo his leading hopes.

But he warns against underestimating Toulon Brook, who won Nestor his first city race as a trainer back in August taking out a Highway at Randwick, and says Miss Academy’s owners deserve a shot at a $150,000 race.

“I’m lucky I have these horses in at the same time and they have the right profile for it,’’ he said.

“The stable is in a good spot. I had Risk And Reward aimed at the race as well, I had a good talk to the owner and we replanned the rest of his campaign and took him out, and he would have created a bit more speed in the race.

“We can’t do anything more with our horses, as far as class wise goes and having the right horse, the likes of Fast Talking and Sneak Preview and even Toulon Brook fit the bill well.’’

Nestor said Fast Talking’s first-up win at Mudgee, on Central Districts Qualifier Day, was a bonus as he steps up to a more suitable distance.

Sneak Preview had his first run since winning a Highway at Kembla Grange in November in the same race, carrying 63kg, and Nestor said he wasn’t disappointed with the horse's eighth placing given the weight and firm going on the day.

“He drops to 57.5kg for the Qualifier and he’s not an overly big horse, only about 470kg, so to get back in with that weight makes it a winnable race for him,’’ he said.

“I didn’t expect Fast Talking to win in the fashion he won over 1200m. He’s more a miler to 2000m horse so for him to kick off his preparation like that is a confidence boost heading into Sunday.

“He’s pulled up well, he and Sneak Preview galloped together on Tuesday and I couldn’t split them. He’s a horse that will win a nice race sometime in the future.”

First and second will take their place in the $500,000 Newhaven Park Country Championships Final (1400m) at Royal Randwick on Day 1 of The Star Championships.