Nothing but quotes from the trainer or jockey of every runner in the $150,000 MNCRA Country Championships Qualifier (1200m) at Port Macquarie on Sunday.

1. Alot Like Home (Steven Fell): “The horse has been working really well, I’m very happy with him. On his day he’s a really smart horse. Since his couple of barrier trials he’s trained on beautifully and the trials have bought him along. He’s ready to go.”

2. Awesome Pluck (Jenny Graham): “He’s still a big baby and still has a bit to go, but he’s progressing better and better all the time. I think he has come through everything well, he came back from Brisbane and had a few weeks off. I’ve been happy with his gallops and I was happy with the trial.’’

3. Golden Comet (Margaret De Gonneville): “He has a wonderful will to try. He has a bit more than average ability plus he is so honest. He’s won over 1100m but Jeff (Kehoe) always said he will stick on a bit so now he is settled there’s a possibility he will run a strong 1200m on his home track.’’

4. Editors (Ross Stitt): “He’s only a little fellow and he’s had around 61kg at his last few, his form is pretty good so he will appreciate the drop in weight. He over raced last start and just had no hope, he’s a better horse if he can be just off the speed.’’

5. Mister Smartee (Tas Morton): “I think he will be getting home when it’s all over. He’s done an absolute treat since his first run and we expect him to be very competitive. I think there is a bit of pace in the race, hopefully we can get into a position and be there ready to pounce when they straighten.’’

6. Shelley Beach Road (John Sprague): “She has to have it run her way, she loves a bit of pace on so she can sit off the back of them without going too hard. She blew up big on me after her last run so I had to give her another trial and since then she’s been bucking her brand off.’’

7. Subtle Grey (jockey Jenny Duggan): "He's in good form and seems like a straightforward horse. I spoke to Louise (Day) the other day and she said you have to let him be where he's happy and not hold him up. Even though he has an awkward alley he'll be able to roll across and get a nice position and we'll go from there.''

8. Jumper Leads (Colt Prosser): “He’s a really nice little horse, he’s just that bit green and immature, we’ve just got to have a conversation with the owners about whether we put him in the deep end. He did draw a good gate so there are a few things pointing towards letting him have a crack at them.’’

9. Phelpedo (Colt Prosser): “He missed a barrier trial leading into his first-up run so he just peaked out 100m to go. He’s been working well since so he is ready to go.’’

10. Texas Storm (foreman Glen Milligan): “His run the other day tells us he wants a mile to be honest but he’s a nice horse. We’ve put the blinkers on, he needs good speed on and that would give him an opportunity to get home. They’ll burn him off early but he should be working home.’’

11. Let’s Rebelle (Jenny Graham): “She puts herself in the race, it’s just whether she has the speed coming back from the 1500m to put herself there because I think there will be a bit of pace. She has to lift a little, yes, but she has been racing well so she has to be a chance.’’ 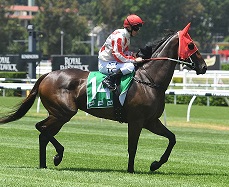 12. Lucciola Belle (jockey Andrew Gibbons): "I think she’s a massive hope in the race. She was impressive in the Queen Of The North. I like this horse, I can’t believe it was only her second win the other day. She might have turned the corner and strengthened up enough to take it to the next level.’’

13. Malea Magic (foreman Glen Milligan): “I have a lot of time for her, her run at Canterbury the other night was good. She didn’t handle the heavy going and was three deep the trip so she had no luck. I think she will run the 1200m out, if I could swap barriers I’d love to.”

15. Odds Or Evens (Colt Prosser): “We’ve been trying to get her to stretch to the 1200m but she’s been most effective at 800m and 1000m. In a good field whether they will roll along she will have the opportunity to be ridden a bit quieter.”

16. Haames (Colt Prosser): “I was hoping I could keep him fresh but he’s showing me he wants further so we have him in the Highway on Saturday over 1800m.’’

17. Monaco Sniper (jockey Travis Wolfgram): "He’s still a bit raw and immature and has a lot of improvement in him. He has some sort of ability, I think he is looking for further and if he does get a run 1200m will be a bit short but he’s a nice horse and a knockout hope.''