It was a Taree quinella when last year's Mid North Coast Qualifier was won and run at Port Macquarie so can trainers Wayne Wilkes and Bob Milligan use the home track to their advantage and win their way again into the $500,000 Newhaven Park Country Championships Final (1400m) at Royal Randwick on April 4?

Here's nothing but quotes from the trainer of every runner in the $150,000 MNCRA Country Championships Qualifier (1400m) at Taree on Sunday.

2. Casino Mondial (trainer Michael Byers): "We gave him three weeks out to freshen him up and we planned three trials going into the Championships, we missed two and had one which he won. We lost a lot of racing. He trialled three weeks ago and on Tuesday he had a 1200m jump out trial and Friday morning half a mile going three quarter. I’ve given him as much as I can without racing him. If we don’t have any more rain it will turn the track quickly, heavy tracks he can’t get going because he’s a big striding horse, and I think he is a good each-way chance."

3. The Drake (trainer Jenny Graham): "If he comes out of the machine on the relaxed side I think he will be right there. He is a horse that has ability, he needs to have the race tempo to suit. A soft or heavy track won't worry him at all. As far as fitness goes The Drake is the one that's rock hard fit." 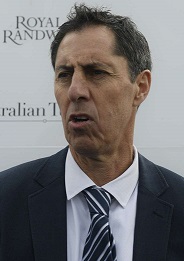 4. Gumshoe (trainer Marc Quinn): "I can’t have him any better, he pulled up out of his win last Saturday really well. From the barrier he’s drawn he will only have to tick the 1400m box to be extremely competitive. He’s been ridden forward and ridden back, that’s generally due to the barriers he’s drawn. He has nice form lines all the way through, and the Plonka form does look reasonably good now. It could favour the rail and on pace and he’s going to be handy enough. He’ll try to make them do a bit of work in the first furlong and then camp off them."

5. Chamisal (trainer John Sprague): "He just takes a little time to get back on his feet so that’s why we gave him a bit of time between runs. The horse has done enormous since that last run, he’s just come out of the ground, hopefully everything is working out at the right time."

6. Okay Boss (trainer Matthew McCudden): "He’s rock hard fit and he will roll forward like he always does. He loves the wet so if he can get away with an easy enough lead he might give a bit of a sight. He’s had two wins for me and both times they were from the extreme outside so if anything I was hoping to draw out. When he draws in you have to bustle him out early. He probably lacks the brilliance of a few of them but I put the blinkers on to sharpen him up and he’s been working well in them so here’s hoping."

7. Acoustix (trainer Tas Morton): "We missed two of the lead up races we planned to have but we have a great training track at Port Macquarie and I’m comfortable with the amount of work I’ve been able to give him. I won’t be blaming the conditions if he gets beaten. He’s had three runs this time in and he’s won his last two, I think the draw is a plus for him and his form over 1400m has been good. If he can get a nice sit he can be there at the moment."

8. Foxy's Foxinator (trainer Jenny Graham): "He's going really well and he's drawn well to be just off the pace. I'm happy enough with him, he's a 1400m horse. If it is heavy I really don't know, on the soft side he will be fine but if it is heavy it could be a risk factor. We missed a trial and the Class 4 here at Port Macquarie when they were called off so it has made it a little difficult but we've had to make the best of the situation."

9. Texas Storm (assistant trainer Glen Milligan): "He was probably a little disappointing first-up at Gosford but we missed a meeting that was called off. Everyone’s in the same boat with the wet weather but if he runs like he did last year in the qualifier he will be right in the race but I’d have liked to have another run under his belt. He’ll be ridden quietly, so we need a bit of speed on, and if there is speed on hopefully he can run home. We think he is a better horse when he gets to the outside of them and let him run on. There’s a lot of positives, if he does everything right he should be right in the race."

10. Dulette (trainer Wayne Wilkes): "He races a bit different to Bellastar. He's more on-speed and she's comfortable getting back a bit. I can't split them, to be honest, going into this race. I like the chances of both horses."

11. Bedtime Stories (trainer Allan Kehoe): "She fires fourth-up and her only try over 1400m was at the Grafton carnival last year and she was beaten a nose. A soft track wouldn’t worry her, it was very heavy the other day. She’s a happy horse and has come on again since the other day. We just wanted to get one more run in her so we had to go to Warwick Farm."

12. But I Know (trainer Ross Stitt): "I put her away with this in mind and she’s come back very well. She’s had two jump outs, I missed one trial which wasn’t ideal. She’s a very good winded mare and not fully wound up but she will run a race. She won her maiden on a heavy 10 so a wet track doesn’t worry her. A bit of tempo would suit her, we are quietly confident she will run well."

13. Bellastar (trainer Wayne Wilkes): "I believe she'll handle the wet track, no problem. I see that in her work and my son Joel, who rides her in her work and so has been on her in wet conditions, is confident as well. We were going to run her in a trial after the last race at Taree last week, but the meeting got washed out. So we had to give her an extra gallop to compensate for that. I think it's enough. To me she looks well and she clearly feels well and we're really happy with her."

14. Music Box Dancer (trainer Grant Prosser): "She goes well but she's probably thrown in the deep end against some seasoned horses. If she'd had another run, the last one was over a mile, she would have been looking for further. she's a big striding thing and I don't know if she can handle the doughy going. She's pretty tough, they all had their chance to beat her last time and she kept fighting. She has to race handy and has to have clear running."

15. Magnalane (trainer Jenny Graham): "Where he's drawn makes it very difficult but he is an up and coming type of horse. The draw means there's only one place he can end up. I'd like to see him get into a rhythm and not be ridden out of that rhythm. If we can get him tracking in behind something that would be good, he doesn't need to go right back."

16E. Moana Marie (trainer John Sprague): "The owner bought her mainly for this race, if she gets a run great and if she doesn’t she’s in the Class 2. She has improved a hell of a lot and things seem to be working out. On her last few runs it’s hard to say how she will go but I reckon there is a big improvement in her, I just don’t know how much."

All the fields, form and replays for Sunday's Country Championships meeting at Taree