Nothing but quotes from the trainers of every runner, plus a couple of emergencies, in the $150,000 SDRA Country Championships Qualifier (1400m) at Albury on Saturday.

1. Forever Newyork (Gary Colvin): “This is the best we’ve ever had him. We’ve planned it all along how it was going to work and it’s worked out well so far. He’s come on well from the Canterbury run.’’

2. Bulala (Peter Morgan): “He hasn’t raced for a while but he’s had two recent trials and is pretty near the mark. We weren’t out there to win the trials but he trialled well and did what I wanted.’’ 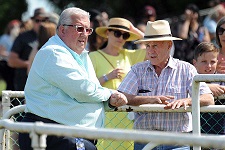 3. Footmark (Jodie Bohr): “We’ve freshened him up for 1400m, he’s as fresh as possible. I don’t know if he’s got the toe to go forward with this bunch of horses, but he’s really right for this race but there are some talented horses so we need everything to go our way.’’

4. Arthur Porrit (Andrew Dale): “I think I presented him too fresh first-up. They went along solid early then the winner stacked them up, he over raced for about 400m and that was the end of him. To be any competitive chance I needed to draw low, I drew two, I’m going in with an open mind and not a high expectation.’’

5. O’ So Hazy (Scott Spackman): "It’s never been my intention to lead with her it’s just circumstances that have prevailed, she’s an on speed runner but I’ve never wanted to lead. She had a nice trial and has come on from the trial. I’m going to sit down and try to map out some sort of a plan for young Wendy (Peel) and hopefully she can do it.’’

6. Takookacod (Scott Spackman): “She’s not far off Listed company, she always has been but she’s had troubles along the way. She’s probably improved a couple of lengths, that’s probably all she has to do. She has to be in her rhythm and she can show a good turn of foot when she gets in that rhythm.’’

7. Squaw Valley (Norm Loy): “He’s only been running over 900m and 1000m but if he gets a nice relaxed run early he has one of the best sectionals of any horse over the last 400m. The prep I’ve given him is longer work because I know if he settles he’ll definitely run the 1400m. I wouldn’t discard him, I reckon he deserves his chance.’’

8. Waiting For A Mate (Norm Loy): “I’ve always had a big opinion of him. He was a bit unlucky at the Valley, he got off the bit and on the wrong leg. If you’re going to go for something like the Championships you have to have them at their top.’’

9. Tully Toff (Gary Colvin): "He doesn’t want a wet track, he was shocking at Warwick Farm but he didn’t like the track. He’s a big horse and once he starts slipping and sliding he throws it in. He’s improving, it’ll be very interesting to find out if he is good enough.’’

10. Son Of Spartacus (Maree Hopkins): “The only expectation I have of the horse is that he will run a good race. He puts everything into his races. I’m happy with where he has drawn and it will give him his chance.’’

11. Rock ‘N’ Roller (Wayne Carroll): “Last time she was about to get into a spot one out and three back and as she got there the front runners pulled up and she was pushed three deep. She never had a break in the race and forget she went around. She gets very opportunity from there.’’ 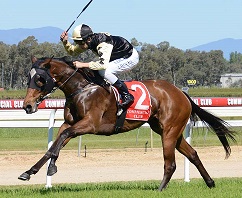 Bennelong Dancer is aiming to go one better than last year. (Pic: Trackpix)

13. Bennelong Dancer (Donna Scott): “I think she gets in really well at the weights, she’s in good order. There’s a lot of boxes ticked for her as far as I’m concerned. She had her final hitout on Tuesday with the blinkers on, she hit the line well and pulled up super from it. We can’t do much more. Everything has gone to plan and if we don’t win on the day it’s no-one’s fault.’’

14. Lost Command (Ron Stubbs): “I’ve been happy with her two trials, I’m not happy with barrier 18. We’ll try the blinkers and see what happens but we’re governed by the barrier and how easy or difficult it is to get over and have a nice run. She’s quick out of the barriers, hopefully she can just slot across.”

15. Lady Mironton (Wayne Carroll): “We can put her wherever she wants to be. I couldn’t have had a better preparation, she’s absolutely spot on. We’ve got no excuses.’’

16. Fashion Tip (Wayne Carroll): “When you draw wide over 1400m at Albury you’re in trouble. I have to sit down and work out what we do, there are a few others drawn wide that race on speed. You have to make a decision and stick by it. She’s going to need a lot of luck.’’

17. Landmine (Chris Heywood): “I targeted him for this race a long time ago and they’ll know he’s there. I was happy with his first-up run, he came out of the gates and fell on his nose. He carried a heap of weight, he got back further than he normally would and he found the line and I was really impressed.’’

18. (Em) Supplyzing (Graham Hulm): “He ran in the race last year and he was unlucky, his form since then has been very consistent. He’s had a freshen up and his work has been good. If he doesn’t get a start he’s in another race and will be competitive.’’

19. (Em) Hail The Hero (Donna Scott): “He’s won here over the 1400m and he came off the track bouncing on Thursday morning. He did work with Bennelong Dancer but she had him covered. If he gets in it he’s there with a chance.’’