Polytrack Provincial Championships Next On The Agenda For Budhwar

The Polytrack Provincial Championships are on the radar for Budhwar and the Hawkesbury gelding’s Muswellbrook win on Monday played an important role towards that goal.

The four-year-old's tenacious victory under 61.5kg topweight in the Class 1 Handicap (1280m) should help lift his current Benchmark rating of 61, with trainer Brooke Somers keen to give her “Mr Consistency” his chance in the rich annual provincial series. 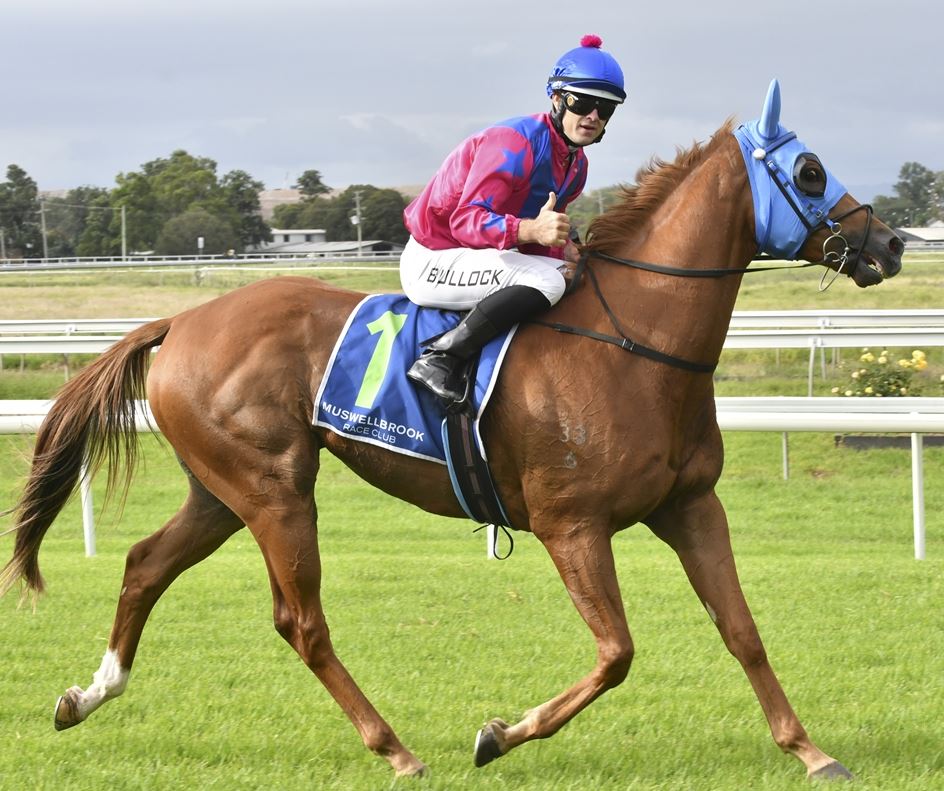 Aaron Bullock returns after winning on Budhwar at Muswellbrook. Image by Bradley Photographers

Though Budhwar has been placed on nine occasions, this was only the second success of his 16-start career, and Somers is very much aware she has to increase the rating to ensure he gets a start in any of the qualifying heats.

Vigorously ridden by Aaron Bullock, Budhwar ($1.85 favourite) was no doubt anchored by his big weight in the closing stages and just held out the strong-finishing Arizona Night ($8.50) to score narrowly.

“I took him to the country meeting today to help get him some confidence back and also to get his rating up further,” Somers said on her way home.

“I was shocked when Budhwar didn’t lead early, but Aaron made the right decision to ease off the pace when there was plenty of speed up front and he showed a good turn of foot after straightening.

“We have always wanted to settle him behind in his races, but generally they haven’t been fast enough to lead him. It was a good performance under 61.5kg. He is a real trier.

“Keagan Latham has done a great job helping to educate Budhwar at the provincials, but going back to country class today I had no hesitation booking Aaron. He is a talented rider and I was pleased to have him aboard.”

Somers made a number of gear changes on $60,000 yearling purchase Budhwar (he has earned nearly $83,000 in prizemoney and a BOBS bonus), a son of 2015 Group 1 Australian Guineas winner Wandjina and the Zeditave mare Tiffinco.

“I feel Wyong suits him because he ran his best race there when a close second to Bethencourt in a Benchmark 64 Handicap over the 1350m last October,” Somers said.

“I was thinking about a suitable provincial race next or perhaps even a midweek in town to attempt to lift his Benchmark rating even more, but we’ll redress the situation now and have a look at the programs and chat with the owners.”

Somers clinched her second win of the season – her first since Tormund at Orange on October 6 – and continued the momentum of Hawkesbury trainers this year; 18 winners being reeled off since January 1.

View the full results with race replays for Muswellbrook here