Keene has spent the past four years as sales and events manager at Wodonga Turf Club and will start at the MTC on February13. 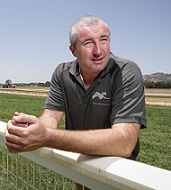 Keene hails from Henty and is no stranger to the region, having spent five years in Wagga when studying at Charles Sturt University.

A keen racing man, Keene said it was an honour to accept the chief executive position at Wagga.

“They’re quite a prestigious club, highly regarded in NSW and I’m looking forward to getting started.”

Keene, 38, will become MTC’s third chief executive since 2000 replacing Scott Sanbrook, who finishes up after seven years on March 1.

Keene jumped at the opportunity when it presented.

“It has been my goal, it is the next logical step in my career and it’s something I’d been hoping to do for a little bit,” he said.

“It’s a great club and a great opportunity to come along.

“To start out, I’ll settle in and see how everything works before I look to put my fresh take on things.”

MTC received applications from a cross the country for the position.

MTC president Stuart Lamont is confident Keene is the right man for the job.

“I’m very happy that we’ve been able to find a replacement for Scott,” Lamont said.

“Steve was very impressive. He has a good knowledge of racing and marketing. He ticked a lot of boxes.

“As anyone who starts out in this job, it requires a diverse skill set and there is always a lot to learn and Steve will certainly learn on the job.”

Keene has been part of Wodonga Turf Club during a significant period of growth and said he has learnt a great deal from chief executive Tom O’Connor, who he says will continue to be a ‘really good sounding board’.

Before his position at Wodonga Turf Club, Keene spent seven years in the car industry at McRae Motors. When in Wagga, Keene was a representative cricketer at South Wagga and also played for Farrer League club Rivcoll.

He will return to the city with his partner Claire and their four children.