Mirfin's Kosciuszko Capitan On Show At The Farm

When it comes to The Kosciuszko, winning is the best advertisement for a low-profile horse and Bathurst trainer Dean Mirfin is looking to I Am Capitan and Worldly Pleasure to put their hands up as contenders at Warwick Farm on Wednesday. 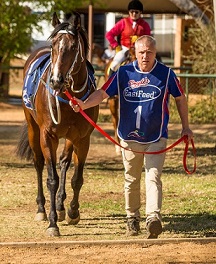 Trainer Dean Mirfin with I Am Capitan (Pic: Janian McMillan)

Unfortunately for Mirfin the stablemates are rivals in the TAB Handicap (1200m).

At this stage of proceedings the trainer rates I Am Capitan as the stable’s main hope of having a Kosciuszko runner but he has a few in the wings waiting to step up.

“Either of those horses, I Am Capitan or Worldly Pleasure, if they were to win would put themselves in the picture,’’ Mirfin said.

“I Am Capitan is probably the stable’s main prospect, I Am Magnificent ran really well first-up at Hawkesbury and is up there amongst them as well.

“Press Box will be back and ready to go soon. There’s a couple around the mark, they probably just need to take that next step.’’

I Am Capitan, along with Press Box and Worldly Pleasure, is a $51 Kosciuszko chance with TAB and he will be sporting concussion plates in front as he suffered a foot abscess after his first-up second to Gumshoe in a Highway at Randwick last month.

The abscess forced him to be scratched from a Highway on July 6 but Mirfin said the plates are just a precaution and the six-year-old has been working well with them on.

“We took the shoes off for a few days and when we put the plates back on him we made the decision to put (concussion plates) on to cushion between the shoe and the foot.’’

Among I Am Capitan’s Highway form is some Kosciuszko flavour with a third to Noble Boy (second favourite) and a second to I Am A Cool Kid (fourth favourite).

Mirfin has found Hugh Bowman to ride the gelding, a $6.50 chance with TAB, at Warwick Farm and expects him to be very competitive.

And that’s something Mirfin knows four-year-old mare Worldly Pleasure ($11) is every time she steps onto the track.

She made the transition to midweek company with an all the way win at Canterbury two weeks ago, giving jockey Eleanor Webster-Hawes her first city win, and the trainer warns she should not be underestimated.

“If the race is won by the horse who tries the hardest and with the most courage it’ll be her,’’ Mirfin said.

“She’ll put herself into a handy spot as she always does and when they turn into the straight she’ll be sticking her neck out trying her hardest. She’s such an honest mare and you wouldn’t be surprised what she’ll do.’’

Five of Worldly Pleasure’s six wins have come among her past seven starts so her rise has taken Mirfin a little by surprise.

“She’s probably overachieved in some ways,’’ he said.

“She’s pulled up well after her last run, so she’s ready to race again. It’s a tough assignment for her but every time she raises the bar she jumps it.’’