They provide the strongest push for punters combining with prolific Greg Ryan and Mathew Cahill on the majority of favourites throughout the six-race TAB programme at the popular central–western circuit. 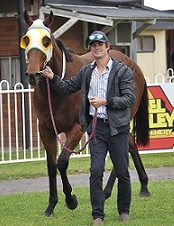 Clint Lundholm, with Joey's Destiny, is set for a big day at Coonamble on Saturday. (Pic: Bradley Photos)

Thompson, a regular regional premiership winner from his substantial Gulgong stables, trained 31 winners last season and Dubbo’s Lundholm has the momentum of 33 wins, his most productive season yet, including city success.

They assessed the best of their contenders to be ridden by Ryan, typically short odds for the jockey’s challenge, closely pressed by Cahill.

They’ll clash in all but one race, so punters won’t be looking beyond them in mostly capacity fields.

“We’ve got some nice chances all day, some young progressive types in their right grade, and Greg on a couple is always a bonus,” Lundholm said.

“His first-up win was tough, he’s progressed from there and I like the way he kept giving when Greg got at him,'' he said.

“He’s got a bit of weight but he’ll be on pace and he’s only lightly raced.

“We’ve got Rufio in the same race off a couple of placings but, drawn way out, likely we’ll wait another day.”

Carinda Road will also be ridden by Ryan in a Three Rivers Machinery BM 50, 1600m.

“He’s drawn way out, up to Greg there, but he’s tough and honest and he’s done really well back from a spell, I rate him,'' Lundholm said.

“Swivel Hips and Shwanky Do have shown enough for steady maidens and Poppy’s Freckle is drawn one and is real close to the money after a couple of runs from a spell.”

Of Thompson’s prospects, his best is likely consistent three-race winner Shake Off to be ridden by Cahill in the final event.

All the fields, form and replays for Saturday's Coonamble meeting