Lundholm Has A Winkle In His Eye About Championships Contender

A bit over six months ago Dubbo trainer Clint Lundholm identified the lightly raced Sir Winkle as an ideal Country Championships prospect for the Western District.

And after discussions with former trainer Kris Lees and the four-year-old’s owners, Dubbo locals Peter and Louise Webb, the gelding is spearheading Lundholm’s quest to win his first $150,000 WRA Country Championships Qualifier (1400m) at Coonamble on Sunday. 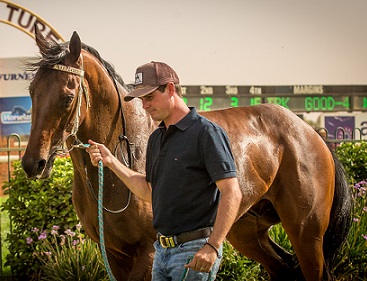 Trainer Clint Lunholm with Sipharderson, one of his runners in Sunday's Qualifier at Coonamble. (Pic: Janian McMillan)

A year ago Lundholm broke a frustrating run of near misses when Sons Of Bourke finished second behind Westlink at Dubbo, becoming his first qualifier for the Final, and Sir Winkle heads his four, possibly five, contenders aiming to go one better in 2020.

“I made the call to the owners and said 'he’s a perfect candidate for the Country Championships',’’ Lundholm said.

“He’s an on pace runner, he makes his own luck, he’s only won two races so he gets in nice and light.

“Kris was taking him to Scone and around that area, he’s a promising sort of horse and suited the Championships criteria.’’

It hasn’t been an easy road for Lundholm to get Sir Winkle ready for Coonamble. He describes the horse as a ‘headache’ though the drought has had a lot to do with it.

Sir Winkle will tackle the Qualifier first-up from a spell, he last raced when a close third at Scone on September 27 before being transferred to Lundholm inside the eligibility cut off, but he’s had his issues.

“He has terrible feet, he’s quite a soft soled horse and going through the drought with everything so hard hasn’t been great for him,’’ he said.

“We’ve been trying to manage his feet and keep the fitness up to him, in a perfect preparation we would have been able to give him a start but it didn’t work out that way.

“I think we’ve done enough work with him to get him there and be a good chance, especially with barrier one.’’

And securing champion jockey Hugh Bowman to ride doesn’t hurt his cause either.

Sir Winkle opened favourite with TAB on Thursday and late in the afternoon was $3.50 behind the Kody Nestor-trained Fast Talking ($3.40).

“His second trial looked a lot better, he looked stronger in the trial and he’s really pulled up and done well since,’’ he said.

“He’s shown a lot of promise winning two out of eight and only missed a place once.

“Everything being equal he’s going to be a chance. There’s lots of positives, he’ll position up on the speed and if he’s good enough he will be in the finish.’’

Sipharderson ($34), Adsum ($23), Dusky Damsel ($26) and emergency So Good To Me ($51) round out the Lundholm team for the Country Championships and he said they’re in good shape though each face their challenges.

Top weight Sipharderson’s chances took a hit when he drew barrier 13, Adsum was scratched at the barrier in his planned lead up run, Dusky Damsel missed the start badly at her latest start and has also drawn wide while So Good To Me will have a throw at the stumps if she gains a start.

“They are good country benchmark horses, really handy horses that don’t miss many placings and all warrant a start in the race,’’ he said.

Sir Winkle wins a trial at Mudgee on March 1

“Sipharderson is probably a 1200m specialist and when you go to 1400m it stretches to the max he wants. I was hoping he’d draw an alley so he could position up nice and close but he’s drawn terrible so we’ll leave it up to Bucko (Grant Buckley) to where he wants to place him.

“Adsum was supposed to start (at Dubbo) last week but he reared in the barriers.

“He’s had a good jump out at home, and been back through the barriers, he’ll go back near enough to last and will be rocketing home late.’’

Of course Lundholm lost one of his major Country Championships hopes when the promising Conspirator was sold to Hong Kong a couple of weeks ago.

First and second from the Coonamble race earn places in the $500,000 Newhaven Park Country Championships Final (1400m) at Royal Randwick on April 4 with the final two spots in the 16 horse field determined in the Muswellbrook Wild Card on Sunday week.

All the fields, form and replays for Sunday's Country Championships meeting at Coonamble