Trainer Cody Morgan has declared Ligulate the horse to beat in next month’s $500,000 Newhaven Park Country Championships Final at Royal Randwick after a ‘soft’ win at Tamworth on Sunday.

Morgan saddled up three horses in the Hunter & North West Qualifier (1400m) on his home track but Ligulate, superbly ridden by Samantha Clenton, made his rivals look second rate despite being badly held up early in the straight. 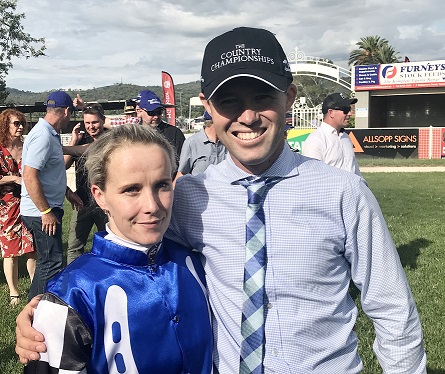 “Yes. I think he is a good horse and I don’t think it is a vintage year,’’ Morgan said when asked if Ligulate can win the Final.

“Have we seen a Victorem or a Noble Boy? I don’t know and I think that will give him a great chance.

“It’s really satisfying, it’s just tremendous. I’ve bought a lot of Darley horses and they are so good.’’

It’s the third time the popular local trainer has qualified a horse for Randwick – each of them former Darley horses – and his second successive win following Unbiased’s victory a year ago.

Ligulate proved too strong for Hit The Target, trained at Scone by Stephen Jones, who improved on his third placing in 2019, while his stablemate Herzegovina dead heated for third with Rod Northam’s Fritz’s Factor.

TAB has installed Ligulate the $6 favourite with to win the Country Championships on April 4 while runner-up Hit The Target a $15 chance.

The four-year-old gelding didn’t begin the best and settled closer to last than first and Morgan admitted to some nervous moments as they turned for home and he was hemmed in between horses with not a lot of room.

“I was more hopeful than confident, I know he is better smothered up so I was hopeful he would get out,'' he said.

“It was pretty soft at the end. He’s going to get his chance in Sydney in four weeks.’’

Morgan identified Ligulate as a Country Championships prospect when he won a Benchmark 70 race at Rosehill last July and was flanked for the presentation by a large crowd of owners through syndicators Australian Bloodstock.

“Australian Bloodstock didn’t have to give me an opportunity when they did so I can’t thank them enough,’’ he said.

“My brother (Luke) has helped a lot with him, he keeps telling me he needs to take him back to the farm and teach him some manners because he’s a reptile.’’

Jockey Samantha Clenton can’t wait to get to Sydney to ride Ligulate in the Final and said it was special to qualify a horse for Morgan given a long association they’ve shared.

Clenton, who won the Taree qualifier on Magnalane last month, rode a treble at Tamworth said she always had faith Ligulate had the class to win if the opportunity presented itself.

“We just had to wait for a split, I know he can produce a short sharp sprint,’’ he said.

Ligulate wins the Country Championships Qualifier at Tamworth on March 8

“He did that at Rosehill when he won, he just burst through. There’s so much improvement to come, just in his attitude and I can't believe how much he has settled down in the head since we won at Rosehill.

“Cody has always supported me throughout my career. When I won on this horse at Rosehill he told me he was on a Championships path and I said gee I’d love to ride him. I think he is a very live chance.’’

Morgan expects to have up to six horses in the Wild Card over 1280m at Muswellbrook on March 22 including Mahalangur, who was scratched from the Qualifier on Sunday, and Whosyourhousemate who won the Benchmark 66 race prior to the feature event.

Because he was an acceptor for the Country Championships but was balloted out, Whosyourhousemate is eligible to compete in the Wild Card.

“Ligulate has been doing all his work with Mahalangur, so it’s good to see that, and he’ll be right to go in a couple of weeks time,’’ Morgan said.