Tamworth trainer Melanie O’Gorman is rapt her talented sprinter Suncraze has been handed a place in next month’s $1.3m The Kosciuszko (1200m) at Royal Randwick thanks to a group of punters from Dorrigo.

If that sounds a little like lightning striking twice then you’re right.

O’Gorman said she was excited when she fielded a call from a member of the Dorrigo Hotel Punters Club on Tuesday because they had an amazing experience together a year ago when Suncraze finished second behind Belflyer in the inaugural running of The Kosciuszko.

“I was happy for them to win the ticket again and be part of it, they were such a lovely group from Dorrigo,’’ O’Gorman said.

“They were real country people. I was thrilled to see them back in the race whether they selected Suncraze or not.’’

Select him they did though group member Garry Penfold said it was put to a vote between the 14 members, most of whom were involved last year, as to which horse they would pin their hopes on. 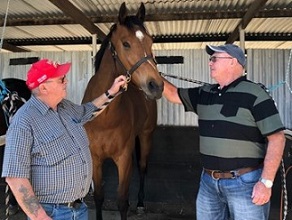 Penfold revealed the group had kept in contact with O’Gorman in the past week or so to check on Suncraze’s progress so while a vote was taken it seems like it was merely a formality.

“Everyone had a pick of a horse and the horse that came up with the most votes out of the 14 was him,’’ Penfold said.

“We had a lot of fun with him last year and we'd been speaking to Mel over the last few days to see how he's going.

“He's a good horse, he had a bit of trouble but he's come through it quite well.’’

So interested was the group in the build up to the Kosciuszko a year ago, they travelled to Gunnedah to watch him barrier trial a week out from the race.

Suncraze is being prepared for one lead up run into the $1.3m feature on TAB Everest Day (October 19) and that will be at Randwick on Saturday week.

It’s a similar program to the one O’Gorman followed last year and proved successful in getting the six-year-old to produce his best on the big day.

O’Gorman said she’s been pleased with Suncraze’s two barrier trials at Scone, the latest a quiet one on August 27, and is confident a throat operation following his failure in the Country Championships Qualifier in March has done the trick.

“What works best with him is to get him really fit then back off and keep him fresh,’’ she said.

“With the drought I was just happy to send him around last time as a track gallop, I didn’t need to push the horse at all.

“I wanted to push him out in the first trial to put pressure on him and see how he responded knowing he was coming back from a throat operation.’’

With regular jockey Corey Brown out injured, Nash Rawiller has been booked to ride Suncraze at Randwick next week and all going well will be given the first choice on him in The Kosciuszko.

“The pressure is off now and it’d be lovely to come out and run a terrific race or win at Randwick but as long as he runs well I’m happy,’’ she said.

Suncraze is a $15 chance in TAB’s Kosciuszko market.