Come the afternoon of the last day of ticket sales for the slot draw in The Kosciuszko, Alex Illes was sitting at home watching the races when an advertisement came on.

"It was a promo for the $5 tickets and it tweaked my memory," Illes said.

"I said to myself, 'Crikey, we haven't bought any tickets', and we always buy some. I knew I had to act while it was on my mind, or we were going to miss out. You've got to be in it to win it!"

It pays to advertise - and to be paying attention during the ad breaks. Illes rang his daughter, Rebecca, and asked her to carry out the task.

"I have a building company and our office is in Turramurra and both my wife (Deidre) and daughter work in the business," Illes said.

"The office is only four doors up from the Turramurra TAB and Rebecca was still at work. I said, 'Why don't you go up and buy 20 tickets for me, 20 for you and 20 for mum'.

"Then on Wednesday, after the draw, I looked up the Racing NSW website and saw there was a slot winner at Turramurra, so I started getting excited. 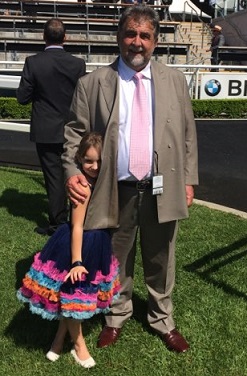 Alex Illes, with granddaughter Isabella, is thrilled to be involved in The Kosciuszko.

"I pulled the tickets out to check and lo and behold we'd won a slot. It was all very exciting. Whatever we get out of it, we're all going to share."

It might turn out to be the best $300 Illes has ever spent!

The family, including son Sam, is right into racing and once they knew they had a slot it was time to quickly do the form and try to do a deal with connections of a horse they believed could win the $1.3 million race for country-trained horses over 1200m at Randwick on October 17.

"We race a number of horses and we also have broodmares we breed from," Illes said.

"Our broodmares are all at Torryburn, John Cornish's property. We've got horses with Kristen Buchanan, Kerry Parker, Will Freedman and Matt Smith, so we're deep into it. We love our racing.

"We own most of them outright. We generally breed our own and the ones we decide to keep, we race.

"My son has got a friend who knows (Intuition's trainer) Kurt Goldman and also (part-owner) Paul Joice and he got talking to him. Sam's friend said, 'You've got to take Intuition, he'll be a great chance of running well'.

"We'd already looked at another runner and weren't able to do a deal, but we were able to do a deal with Kurt. He's the majority owner of the horse as well as the trainer and I put it to him that we'd be happy with the 40 per cent of the prizemoney, but could we get the trophy if the horse won.

"Kurt was fine with that and we were thrilled because with all the races we've won over the years we've never won anything where there's been a trophy, except for one race in Melbourne.

"We're tickled pink with that arrangement and if we happen to win we'll be over the moon."

Intuition is also part-owned by Canberra Raiders NRL captain Jarrod Croker and the horse will run in specially-designed Raiders silks, with a percentage of the prizemoney won to be donated to the Ricky Stuart Foundation promoting awareness and understanding of autism.

Goldman said he had no problem giving up the trophy, should Intuition salute.

"The important thing was to get the horse into the race," he said.

"If that was going to be the deal-breaker for the slot-holder, I was OK with that.

"It doesn't bother me, I've got plenty of trophies. He didn't try to barter with the prizemoney, so we were both happy with the deal. The main thing for now and for my own future as a trainer is to have a horse in the race.

"I've got a major share in the horse, so if it wins I can always buy myself a trophy."

Goldman said Intuition was tracking well towards The Kosciuszko.

"He'll have a barrier trial over 1000m at Rosehill on September 28 and then go into the race first-up," he said.

"I'm very happy with him. He just keeps on improving in his coat, getting brighter every time he steps out. I'm really happy with the way he's coming to hand."