Kings Of The Kosciuszko Keen To Fly Again

One $5 ticket in The Kosciuszko sweep took three Northern Beaches punters on the ride of a lifetime last year and Thad King, Richie Butterworth and Nathan Lavers are getting involved again in 2019.

To be fair they did buy 20 tickets but thanks to Belflyer’s famous win in the $1.3 million race for country trained horses the ante will be raised this time around. 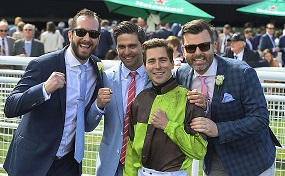 And, if they do happen to be one of the 14 lucky sweep winners, they already know what horse they’ll select thanks to the deal they did to become an owner of Belflyer.

They want him, trainer John Shelton and jockey Adam Hyeronimus to defend the crown.

“We’ll be buying tickets, loading up and see how we go,’’ Thad King said.

“I think we’ll be getting ourselves 100 or so, we’ll be keen to go again if we can. Every time we have a little win on the TAB app we’ll pick another couple up and keep going until it’s draw time.’’

The Kosciuszko is a unique racing experience, a bit like The Everest but one that allows the public to select the horse they want to run in the race and become an owner for the day.

But it’s not like one of those ‘owners experience’ deals, a chunk of the prizemoney earned by all 14 runners is yours to take home. First prizemoney is $685,000.

Part of the deal King, Butterworth and Lavers did with the owners of Belflyer was to become an owner of the horse for the rest of its career so a month after The Kosciszko they celebrated another win when the gelding scored at the Sunshine Coast.

“It was an amazing six week period, all the way through from winning the ticket to the different events, winning the race,’’ King said.

“It was an incredible experience and it’s helped us all in different ways.

“I’ve just had a baby, Richie is getting married and Nathan has been on a couple of world trips in the past year.

“We keep in touch closely with the other owners and John and Adam. It’s one of those things you can’t believe but it’s great that it happened.’’

The $5 Kosciuszko tickets went on sale on July 1 via TAB outlets, online and the TAB app and this year 14 winners will be drawn on Tuesday September 10.

King and his mates were in an unusual position last year as their ticket wasn’t among the first 12 drawn out and only gained a call up when one of the winners didn’t claim their prize.

So what advice does King have for anyone thinking of buying a ticket or 10 – aside from go for it, it’s an experience you won’t forget?

He’s a big believer in doing the form on the horses eligible and not simply rushing to the top of the market – Belflyer started $71 and the trio only had eyes for him.

“We put a lot of effort into selecting Belflyer,’’ he said.

Belflyer wins the inaugural The Kosciuszko at Randwick

“We were lucky because nine horses were already selected and we had an idea of how the race was going to pan out.

“Belflyer was the fourth top rated horse in the race at start time and he was the 10th picked. People go to the top of the market too quickly without doing the form. They look at the odds rather than the actual horses.’’

And when it comes to doing a deal with connections of he says don’t be afraid to negotiate, be realistic and don’t just pick a horse because you’re offered a better percentage.

As for Belflyer, King said the rising eight-year-old ($26 in TAB's market) will be back in Shelton’s stable soon after a minor injury was detected and it cut his autumn program down to just one run. If the trio don't win a slot in the sweep, as part-owners they hope someone else will select him.

“He’s in at the pre-trainers at the moment so should be back in the stable in a week or so,’’ he said.

“Hopefully he’s good to go and defend his crown if we can get someone to pick him.

“His injury is an old one they picked up so he’s been racing with a bit of an injury and hopefully now he’s even better than before.’’