Trainer Barbara Joseph is in awe of the strength of Saturday's $150,000 SERA Country Championships Qualifier (1400m) at Goulburn.

But with that strength comes the knowledge if she can qualify either Embezzlement or Dutchesse Moshe, or both, the stable can head to Randwick in April confident.

"I think they are well and truly in it, right up to the mark of the other runners we've had, and Randwick will suit them if they get there,'' Joseph said.

Joseph, who trains in partnership with sons Paul and Matt Jones, has saddled up two previous runners in the Newhaven Park Country Championships Final. 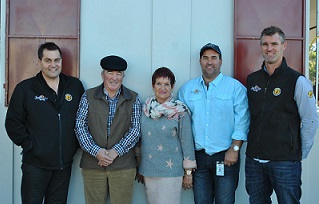 Just A Blur finished fifth in the inaugural running in 2015 and Bank On Henry was midfield behind Clearly Innocent in 2016.

Both Embezzlement and Dutchesse Moshe are mares in peak form ahead of the Qualifier and Joseph said though their constitutions are different they are worthy contenders.

Embezzlement hasn’t raced since a five length win in a 1500m Highway at Rosehill, where she was the only horse in the race to break 12 seconds for the last 200m (Punters Intelligence), and has spent a week in the paddock to keep her on the fresh side.

“There's not much of her but she has a motor and she keeps on going. I wouldn't mind betting she gets out to 1600m or further,’’ Joseph said.

“She'll be on the pace or be the pace if she can get her own way. I'd love to see it rain for her but I don't think it will happen.’’

While Embezzlement enjoyed some R&R, Dutchesse Moshe has been kept busy with a barrier trial victory since posting successive wins at Moruya and Albury.

“We gave her a trial because she needs the extra hitout, she's a lot bigger and heavier and does very well in the stable,’’ Joseph said.

“She's a pretty under rated horse, and she's had no luck in some of her races.

“I thought she won pretty easily at Albury, it was a very good win. Even the run before was good as well, I wondered why the jockey was riding so quiet but he dropped the whip.’’

Embzezzlement is a $26 chance in TAB’s all-in Country Championships market while Dutchesse Moshe is on the $51 line behind Noble Boy whose $3.50 favouritism goes on the line at Goulburn.

First and second from the Goulburn Qualifier earn a spot in the $500,000 Newhaven Park Country Championships Final (1400m) at Royal Randwick on April 6.

All the field, form and replays for Saturday’s Country Championships Qualifier meeting at Goulburn