Jones Keen To Keep The Ball Rolling At Scone (Tuesday)

With six winners (20%) and a further six placings (40%) from his past 30 runners, local Scone trainer Stephen Jones has had a handy couple of months and believes he can keep the momentum going on his home surface this Tuesday.

Jones has had a long relationship training horses for Gerry Harvey and he saddles up two runners for the retail magnate with Heir Presumptive presenting a bit of value in the Railway Hotel Muswellbrook CG&E Maiden Handicap over 1100m. 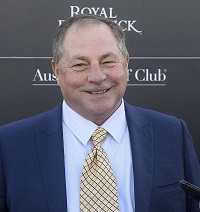 The Street Cry gelding is yet to place in his first three starts, but Jones has a bit of an opinion of the five-year-old.

“I know he’s a decent price in the paper, but I think he’ll get a great run from that gate and he is a really good hope,” Jones said.

“His form doesn’t really suggest it, but I reckon he’ll be racing very well.”

Regardless, the race will be an interesting watch as we get to see the debut of Rouchel, champion sprinter Chautauqua’s half-brother.

The three-year-old More Than Ready colt heads to the races for the first time following two solid metropolitan trials for the Snowden camp.

Jones’ other runner for Harvey is Palais De Louvre in the Commercial Hotel Aberdeen F&M Benchmark 58 over 1300m.

The six-year-old Smart Missile mare has been thereabouts of late and will appreciate walking across to the races rather than having to float elsewhere.

“She’s a bit of a handful on the float and always plays up,” Jones said.

“It will be beneficial to race on her home track and take travel out of the equation.”

Jones also has the intriguingly named Shame Warned engaged in the Royal Hotel Murrurundi Class 1 and Maiden Plate over 1600m but will wait until Monday evening to decide whether to run or not due to the wide barrier.

When quizzed about his relationship with Harvey, Jones was nothing but positive.

“I’ve trained horses for him for over 20 years,” Jones said. “He’s such a good bloke, he’s like family to me.”

Another local trainer John Ramsey is well represented with three live chances on the card. His three-year-old Sepoy filly She’s Unusual debuts in the Thoroughbred Hotel Scone Maiden Plate over 900m following a promising trial win on his home track on August 14, and he also lines up Pair Of Heels and the uber-consistent Daiquiri Lass.

Gates open at 11am with the first race scheduled for 12.50pm.