Over the two days of the 2019 Alan Harris McDonald Wagga Gold Cup Carnival, the Murrumbidgee Turf Club will be honouring and celebrating the riding career of injured jockey Tye Angland in holding the Tye Angland Medal. 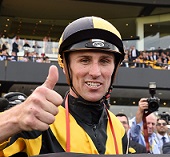 The Murrumbidgee Turf club will honour and celebrate the riding career of injured jockey Angland, who is from Wagga.

In November last year, Angland fell from his horse in Hong Kong and has a fracture and dislocation of the spine as well as a spinal cord injury.

The multiple Group One winning jockey grew up in Wagga and piloted Life Less Ordinary to an easy win at last year's Gold Cup.

MTC chief executive officer Steven Keene said the club wanted to help Angland and celebrate his career and thank him for his support of the club.

“This is a chance to celebrate Tye’s career over our cup carnival,” he said.

“We have secured some big jockeys and are hopeful of locking in a couple more ahead of the carnival.”

The Tye Angand Medal will be counted the same way as the jockey challenge with both days added together to reveal the winner.

Along with receiving the medal, the winning jockey will also receive prizemoney thanks to the generous sponsorship from David Barnhill and the team at the William Farrar Hotel.