Jarvis Only Has Eyes For Championships With Evopex

Jim Jarvis has been deliberate about every aspect of Evopex's Country Championships campaign right down to buying the horse specifically for the series. 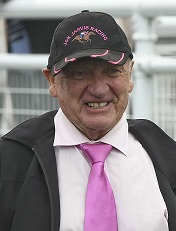 And from the moment Evopex crossed the line to win a Highway at Randwick back in October the Coffs Harbour trainer has had his sights set on returning there on April 6.

Happy with the five-year-old’s weight of 57.5kg in Sunday’s $150,000 NRRA Country Championships Qualifier (1400m) at Grafton, Jarvis set about tackling the race first-up.

“I would have loved to give him a run but he's only carrying 57.5 and the extra weight means a lot to a little horse,’’ Jarvis said.

“What I liked about him, up in this area we get some wet tracks and he goes on wet or dry.

“So I hope the rain that is promised will hit Grafton on Saturday.’’

Evopex has appeared first-up on three occasions in his career to date and finished third on each occasion but to qualify for the next month’s final he needs to improve on that to at least second.

While the form guide says Evopex has only had one barrier trial Jarvis said he’s had plenty of work to have him ready, and fresh enough, for 1400m.

“He's also had a couple of good hard gallops between races at Coffs,’’ he said.

“Coffs Harbour has been very good to us allowing unrestricted access to the grass for championship horses.

“He comes to hand pretty quickly and it was a hard trial at Grafton. I thought if I gave him a run he might go over the top.’’

Jarvis has an able back-up to Evopex in stablemate Lawan who will be having his second shot at the Qualifier having finished sixth behind Snitz in the race last year.

The gelding ran fourth in the Armidale Newmarket (1100m) at his first run back this campaign and Jarvis said it was an ideal clean out for Sunday.

“It was a tough run but that's what we wanted. He was a week or two behind the other horse coming in,’’ he said.

“They're different types of horses. For Lawan 1400m is probably as far as he'll go whereas Evopex will get over a bit further.

“If we strike a damp track he will come into his own too.’’

Evopex is a $51 chance in TAB's all-in market on the final while Lawan is at $101. The shortest priced qualified horses are heat winners Bennelong Dancer (Albury) and Unbiased (Tamworth) at $11.

Evopex wins a Highway at Randwick in October

Jarvis has been training for 54 years and prior to settling in Coffs Harbour about 11 years ago he would regularly pillage the country Cups in the area as he wintered away from his Cranbourne base.

Back in 2016 he qualified Ultimate Dreamer for the Country Championships Final but seems bullish about his 2019 pair if they get the right conditions.

“We've done a lot of work and we think we're going to the race with two live chances,’’ he said.

First and second in the Grafton Qualifier earn a place in the $500,000 Newhaven Park Country Championships Final at Royal Randwick on April 6.

All the fields, form and replays for Sunday's Country Championships meeting at Grafton