It's A Double Delight For Dailey In The Kosciuszko

Bob Dailey got out of racing for a while.

But then he got back in and isn't he glad he did. He now part-owns the favourite for the $1.3 million The Kosciuszko and will have the same horse running for him as one of the lucky slot-holders for the big race at Randwick on October 17. 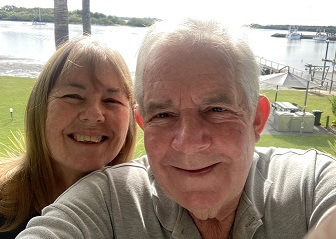 The horse is It's Me, trained by Brett Cavanough at Scone. But if you're looking for someone who couldn't feel much luckier at the moment, it's him - Bob, a 72-year-old businessman from Newcastle.

"My wife, Kerrie, and I are partners in everything and we own five per cent of the horse," Dailey said.

"I wish now we'd taken more, but at the end of the day it doesn't matter how much of a horse you own, the excitement is 100 per cent - especially when you've got one as good as It's Me.

"I bought 13 tickets in the TAB's $5 slot draw for The Kosciuszko. No reason for that number - it was just how many I ended up with from a few random purchases.

"They put on a special offer where if you owned a horse trained in country NSW and you bought five tickets you got an extra ticket free. I did that twice.

"The winning ticket was among that last lot of five that I bought. If there hadn't been that offer I mightn't have bought those last five and not ended up winning anything."

That was after the syndicate of It's Me's owners threw money in together to buy tickets in the hope of winning the slot.

"We all put in $250 and bought $5000 worth of tickets," Dailey said. "One person kept those all together and after that everyone was free to do what they liked. I actually don't know any of the other syndicate members personally."

Dailey said that when he received a call from Racing NSW after the slot draw had been conducted he didn't think it would be to tell him he was one of the slot winners.

"As part of the buy-five-tickets, get-one-free promotion they were giving a few Akubra hats away and you went into a draw to win one," he said.

"I was sitting at my desk and I looked at my phone and there was a message that had been there for 40 minutes to ring Racing NSW. I sang out to my wife that maybe I'd won one of the Akubras.

"Anyway, I rang Scott Kennedy at Racing NSW and got his message bank. He rang me and got my message bank and then I rang him again and we got to talk to each other and the first thing he told me was that I was a winning slot-holder."

Dailey was able to act quickly enough to do a deal on the prizemoney split with the It's Me ownership group - including himself, in a roundabout way - and have the lightly-raced and very promising four-year-old mare run for him.

"I spoke to Sam Lyons, the syndicate manager, to check first whether the syndicate had won a slot," he said. "The answer was no, so we did a deal."

At that stage It's Me had won at each of its two career starts, and the second of those, in a TAB Highway Handicap at Randwick, had catapulted it into a prominent place in TAB fixed odds betting on The Kosciuszko.

But then, last Saturday, It's Me again won brilliantly at Randwick and was hoisted to outright favouritism for the 1200-metre race, which is for country-trained horses only. 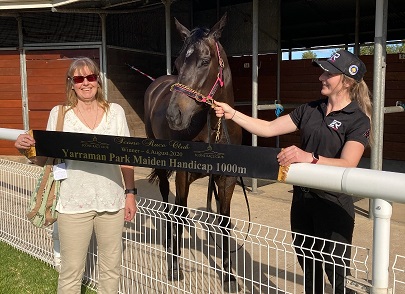 Kerrie Dailey with It's Me and handler Rowena Dillon.

Dailey said he and his wife, Kerrie, their son, Greg, and grandson Jared were all there, and, Bob says, will be there again on the day of The Kosciuszko.

"I'm so happy," he said. "We got an email this week from Brett to tell us the horse had pulled up perfectly and was in A-1 condition.

"We've been involved in racehorses for a long time overall. We used to breed them as well. We got out of it for a while - we were selling our property and cutting costs - but then about three years ago we sponsored a race at Newcastle and were at the races that day and got enthused all over again.

"We got involved as owners again and luckily we've had some shares in some pretty nice horses. But It's Me is the best and to be honest I'm not surprised how far she's come in such a short time. We went to Scone to watch her win her maiden and she was obviously a horse to be reckoned with."

Cavanough has two horses from his stable in the race. The other is four-year-old gelding Fender, a winner at four of his five starts. Daley said the care given to the horses by the stable staff was a big reason they are so content and run well as a result.

"Rowena Dillon works for Brett and does everything for our horse," he said.

"She even drove the truck with him down to Randwick last Saturday. She's just a wonderful young lady who loves the horse to pieces and you can see the horse loves her as well. It's a really nice story."