Humour The Best Tonic According To Beer

Always look on the bright side of life - it's straight from the Monty Python songbook and goes a small way to summing up the breath of fresh air that is Albury based trainer Mitchell Beer. 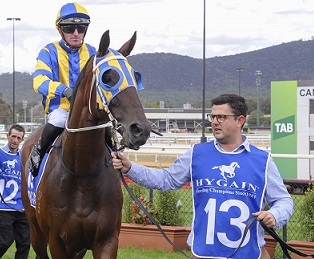 When he made a permanent move from Mornington to the border town in NSW with 20 horses in September last year it was seen by others as a huge risk, that he was 'absolutely mad' for doing it, and someone even told him he'd probably starve.

Twelve months on, and with his horse numbers almost tripled, it seems Beer is having the last laugh - mostly at his own expense of course.

His Twitter feed, filled with biting satire, witty observations and just making light of serious things like winning and losing in racing and in life, is testament to that.

And he's lapping up everything that comes with being a country trainer.

"I never wanted to let becoming a trainer change me in any way and how I go about life.

"You don't have to act serious and play that whole game to the public to justify that you're dedicated and are doing a good job.

"I couldn't give any more time or effort to my stable but I don't live in the fear that's not perceived.''

Whether you're a trainer, jockey, stablehand, strapper or any other participant in what many refer to as 'the great game' if you're a member of the racing industry it's a way of life.

So why make it harder than it already is? That's the Beer philosophy anyway.

"We get beaten more than we win in this caper and having the attitude that losing is okay, and not putting a huge amount of pressure on myself, really translates to the way I train and run my business,'' he said.

"This industry can be very consuming. It's a lifestyle, it's not just a job where you can clock off on Friday afternoon and come back.

"It's really important not to let the job and the racing game consume you as a person.

"I worked for a lot of trainers who have trained for a long time and have felt the brunt of that. It's a demanding job.

"It's taken a toll on them from spending 30 years working in the racing industry. I made a promise to myself that I didn't want to become that.'' 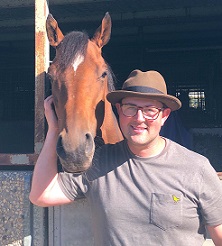 The short version of the Mitchell Beer back story is, despite his best efforts to step outside the racing bubble, he was always going to play some role in racing.

His father Les was a prominent jockey around country Victoria and his sister Ashlee is also an ex-jockey.

Even though it sounds like one of Beer’s gags, this isn’t a joke - he wanted to be a golf coach, and spent a year as a pro shop apprentice, and he wanted to fight fires.

"One day I accepted that racing was my fate,’’ he said.

“I thought if I'm going to do it I'm not going to be mucking out boxes for the rest of my life and I'll have a real go at being a trainer.

"Fast forward and I'm waking up to 50 horses in the back yard in Albury.''

When he moved from Mornington, which for someone who grew up in Melbourne was considered to be 'the bush', across the border Beer knew he was making a shrewd business decision.

He'd worked with many of the big names in the industry and transitioned to training in his own right four years ago through a partnership with Max Hinton.

What he didn't know was how much it would open his eyes.

Not only to a more relaxed setting to train his horses but to a racing community that embraced him the more he embraced it.

"I was unsure about how I'd go living here. I think this place has been as good for me as it has the business,'' he said.

"I get out of bed at 5.30am. We're not rushed, we can work at a slower pace and we can spend more time with the horses.

"It's given me a whole new zest for racing and the country Cups circuit is phenomenal. Country racing is so strong in NSW, the prizemoney is one thing but the support from the towns in the area is phenomenal.''

Two of those country cups spring to mind - the Cootamundra Cup he won with Dreams Of Paris and the Griffith Cup won by Logan River in a deceptively tight finish.

Beer celebrated his first Group win, with Almighty Girl, in 2016, prior to the Albury venture, but you could be forgiven for thinking these $20,000-$30,000 features held Group 1 status.

"It gives you this amazing boost and zest to do it again,'' he said.

"The thrill the owners got out of that horse winning the Griffith Cup was unbelievable. We took the Cup to The Star hotel in Albury and passed it around the pub, everyone had a beer out of it.''

For year two of Beer's adventures in racing the bar will be lifted. He has the pressure of the recently achieved '(Albury) premiership winning trainer' title added to his Twitter bio to live up to.

And his team has set their sights on claiming the 2020 Albury Cup with an imported stayer he sourced from the UK called Perfect Illusion - or Gavin as he's known around the stable.

"I would never have had the confidence to fly to the other side of the world and buy an international 12 months ago,'' he said.

"We haven't had a huge amount of city success or won Group races in the last 12 months but we've trained a lot of winners and attracted horses to the area.

"The team we've built up, both horses and people, has set us up for a fantastic three or four years ahead in Albury.''