Hull Preparing To Hit The Liiiine On Australia Day

He’s coined a couple of phrases now part of punting culture, will always take a stab at a photo finish result and been the voice of thoroughbred and harness racing in the southern districts of NSW for over 40 years.

Allan Hull is preparing to ‘hit the line’ on his broadcasting career, officially, at Sunday’s Australia Day meeting at Wagga and he does it confident when it comes to race calling he hasn’t worked a day in his life.

“You don’t do something you love for 50 years and walk away and not have some feelings about it,’’ Hull said. 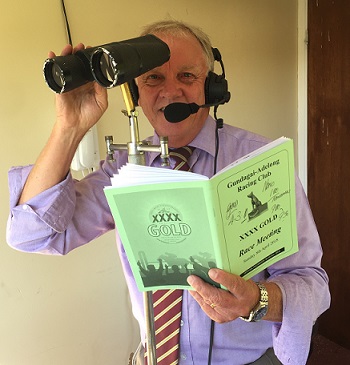 Allan Hull has been behind the binoculars for over 40 years calling races in the southern districts.

“So, I’m looking forward to it but with mixed emotions. Over the journey you meet lots of people and for me it hasn’t been work it’s been a passion of life.’’

Hull, who turns 70 later this year, began calling trotting trials at Wagga as an 18-year-old and took over calling the trots there in late 1970.

It would be almost another decade before he called the first of his 41 straight Wagga Gold Cups in 1979 and he assumed the on course broadcaster role from the legendary Ted Ryder with the Murrumbidgee Turf Club in 1982.

But you can’t sum up in a paragraph or two the working life of someone who, unbeknownst to some, is a qualified fitter and machinist, has worked in AFL broadcasting for a quarter of a century, sold TV and radio advertising and also dipped his toe in rugby league and greyhound calling.

So let’s get down to the fun stuff.

When it comes to Allan Hull there’s two particular phrases he’s known for – ‘the gates craaash back’ at the start of a race and ‘And they hit the liiiine…’ when they do just that.

And he revels in the fact people recognise him for adding some colour and excitement to a race.

But how did they come about?

“At a lot of the little country tracks you’re maybe closer to the start of the races and the gates do crash back,’’ he said.

“Not many punters would get close enough to realise that, though they don’t crash as much as they used to with the modern hydraulics.

“That was something I thought sounded good and it was a bit more exciting than 'they’re racing'. When I hear others using I think that’s great because it’s a reflection that somebody else thinks it it’s okay as well.

“It’s like Ken Howard’s ‘London to a brick on’. It’s an identifying phrase that separates you from the others.’’

What about stretching out the word ‘line’ at the business end? It’s a delaying tactic, Hull says.

“The extension of the word line is buying that nth of a second to try and work out who has won,’’ he said.

“They only ever ‘hit the liiiiiine’ with an extended line in a really close photo. You’re buying that little bit of a second to try and form your opinion.’’

An opinion is something Hull isn’t short of when they do hit that line. He says it’d be a very rare occasion when he doesn’t use that nth of a second to have his say on who has won.

Sometimes you get it wrong, but Hull says punters want you to have an opinion despite the occasional cries of disdain race callers cop when they do go the wrong way.

“I love having a crack at a photo finish,’’ he said.

“You’re either right or wrong, and if you’re right 90 per cent of the time that’s better than sitting on the fence not having a crack at all.

“I think the punters probably expect you to have a crack and I think those that have any compassion at all realise that once in a while you’ll get it wrong.

“You’re making a decision in the nth of a second, you don’t have time to have three replays before you spit out a name. That’s all part of the caper.’’

Spare a thought, too, for Hull’s replacement when they are announced because calling the races at Wagga comes with its challenges.

“What people don’t realise is they are covering the major races with four or five camera but we have one pair of eyes,’’ he said.

“The punters also don’t realise that the grandstand isn’t parallel to the track. If you stand in the same spot every time you know the line, but it can give people a false impression of where the line is.’’

Two of Hull’s biggest highlights have come in the past few years, when he called ‘victory for Victorem’ in the Country Championships Final at Randwick in 2018 and being part of the ‘race caller relay’ with Josh Fleming, Paul Dolan and Anthony Collins at Toowoomba last year.

He called globetrotting sprinter Takeover Target as he started his career at Queanbeyan and Wagga and a few years ago little did he know Santa Ana Lane would become the country’s best sprinter when he posted an upset win in the Wagga Town Plate.

While Sunday’s Wagga meeting will be Hull’s last official thoroughbred duty – there’s also an Albury harness meeting on January 31 to complete - he says he’ll be doing something of a farewell tour by calling some non-TAB meetings in the area as a thank you to the clubs for their support.

“I’ll be 70 this year, fortunately I’m still happy and healthy and have a couple of kids and grandkids. At the end of the day there are other things in life to do,’’ he said.