The home track advantage on Saturday could be vital to Coffs Harbour trainer Brett Dodson’s chances of qualifying Pace Stick and Quadriga for the Newhaven Park Country Championships. 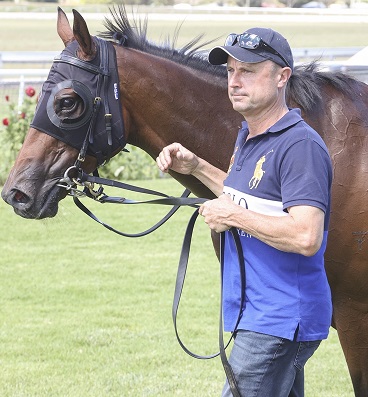 Dodson has been “racing against the clock” with both gallopers, but for different reasons, to have them ready for the 1400m of the $150,000 Northern Rivers heat so he’ll take any head start that’s handed to him.

“All my horses race well here so it’s ideal for me and no travelling is always good,’’ he said.

“Pace Stick won his maiden here by four lengths and was beaten narrowly over the carnival. He’s trialled well here so it’s a plus for him.”

Coffs Harbour was due to host the Northern Rivers Qualifier for the first time in 2020 but after two washouts the race was run at Grafton and Dodson said he's rapt to see the club get a second chance.

Things haven’t gone to the script for Pace Stick who was scheduled to have his first run on the road to the Country Championships on January 2 at Eagle Farm but missed a start as an emergency so Dodson trialled him a day later at Ballina.

He then resumed in a 1000m race at Taree eight days after the trial and ran fifth, the next step was a 1200m event at Newcastle on January 30 but that meeting was abandoned after four races so he was again forced to trial.

All that means he may be vulnerable at a strong 1400m but it's a distance he's adamant he'll relish.

“It’s a bit unorthodox and not ideal, we had it planned out for a long way out and we went from Plan A to Plan B and Plan C,’’ he said.

“He’s well in himself but being rock hard fit for the trip would be the only query.

“I’ve always had the impression he’s going to run 1400m and if he’d had that run under his belt he’d be the horse to beat.

“He led them up in a 1250m race at Taree before his break and got rolling and gave a kick and on the line he was holding them if not drawing away.”

Dodson expects the four-year-old to be in the firing line throughout on Saturday and any breathers he gets in the run will only help his cause.

“He’ll still show plenty of toe and roll along and will certainly give a sight,’’ he said.

“There’s a couple with a bit of speed in it so if they wanted to go silly I’d take a sit on him but he wouldn’t be far off the speed. Preferably I’d like to lead and not go too quick but these are high pressure races.”

The tale of Quadriga’s Country Championships preparation is a little different.

It all seemed to be tracking perfectly when he won a Benchmark 70 at Canterbury back in May last year, at his third start for Dodson, but injury has since got in the way.

The gelding was found to have a slight tear in a hind tendon so was given plenty of time off and when he returned it was rescanned and Dodson was forced to keep him to light work for a while longer.

He hasn’t had an official trial and, if he gallops well on Thursday, his place in the race won’t be decided until as late as possible.

Pace Stick wins a trial at Grafton on February 2

“Pace Stick will definitely line up but I’ll leave Quadriga until the last minute, we might have to wait until Muswellbrook if he’s not quite there,’’ Dodson said.

“I think he’s a class above them, probably the only horse really proven in city class.

“He had a jump out last week and he was super, he won it pretty easily. He’s the quality horse, I’ll give it as long as possible to see how his fitness is for 1400m first-up.”

As Dodson alluded, if Quadriga isn’t quite right for Saturday he’ll look to take his chances in the $50,000 Wild Card (1280m) at Muswellbrook on March 21.

All the entries, form and replays for Saturday's Country Championships meeting at Coffs Harbour