They call him ‘Hippo’ but jockey Adam Hyeronimus could be renamed the ‘Country King’ if he can complete the Kosciuszko-Country Championships double at Royal Randwick on Saturday.

Back in October Hyeronimus stole the inaugural $1.3m The Kosciuszko on Grafton galloper Belflyer, who started $71. 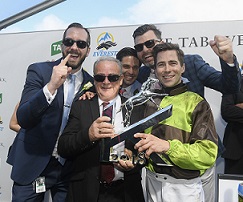 Of course the 29-year-old is a country boy, hailing from Cowra, and he’s heading into the $500,000 Newhaven Park Country Championships Final (1400m) on promising Dubbo gelding Westlink – a $31 chance with TAB - believing he can win it too.

“I know Westlink is an outsider and people probably doubt that area’s heat as not being the strongest but I’m happy with my horse and there’s no reason why I can’t win it as well,’’ Hyeronimus said.

“It’d definitely be very good to back it up after winning the Kosciuszko.

“It’s good to see a couple of rough results in the heats and races like the Kosciuszko because it shows people there is hope, that it can happen to them, and that’s all people in the country need.

“That gets them out of bed for the next six months and keeps the dream alive.’’

The best placing achieved by a Western District qualifier so far in the Country Championships Final has been Not For Export in 2017 who ran third as a $201 chance.

Westlink, trained by Darren Hyde, won the opening qualifier of the 2019 series on his home track back on February 10.

Hyeronimus’ manager chased Hyde for that ride thinking he was the horse to beat.

After he won the Qualifier so impressively the jockey was also sold on the Westlink’s ability and wanted to stick with him through to the Final.

Hyde elected to take the four-year-old to Cowra for the Diggers Cup (1375m) on March 4 to bridge the gap to the Final and it was that win that reassured Hyeronimus he’s on a horse capable of winning at Randwick.

“He was expected to win there but Cowra is quite a tricky track and he drew an awkward barrier,’’ he said.

“I was always confident he would beat them it was a matter of where he’d end up and how the race panned out for us.

“Once I asked him to find the line he did and he went away from them. He’s a nice horse, he’s quite relaxed, he knows his job, that makes my job a hell of a lot easier.’’

Hyde said having Hyeronimus is the saddle gives him confidence the horse can be competitive, especially since the jockey wanted to retain the ride wherever he went.

Westlink wins the Diggers Cup at Cowra on March 4

“He’s had two rides for two wins and he keeps telling me they go too slow for him,’’ Hyde said.

“You don’t ride for Gai Waterhouse if you can’t ride, so I have all the faith in him.’’

The one uncertainty with Westlink is how the horse might handle a soft or heavy track at Randwick on Saturday.

Hyde said he worked the horse on the Dubbo course proper last Monday week on a heavy track and reported he seemed to handle it well, quickening from the 400m and again at the furlong.

When asked for his view, Hyeronimus believes a soft track holds no fears.

“He’s the type of horse that gets it done and because of that attitude a soft track doesn’t worry me,’’ he said.

“If it ended up getting to heavy that’s when I’d start to have my queries.’’